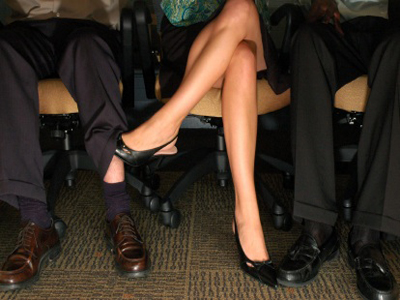 Ladies sit with their legs crossed, gentlemen sit with their legs akimbo. If you’re not entirely sure why, then you may be too young to have access to the internet. As much fun as sexual equality sounds, there are physiological differences between females and males that neither can naturally ignore. As a child there are more important things to focus on, like climbing trees and seeing how many marshmallows you can fit in your mouth. At puberty, hormones hijack your body and suddenly being able to boast about fitting twenty-six marshmallows in your mouth no longer seems to impress the females. The males on the other hand…

When we’re no longer boys and girls, playing at mummies and daddies is for reals. The only downside now is convincing ourselves and others that we’re not just playing around anymore.

If ‘England and America are two countries separated by common language’, females and males are two genders separated by body language. Oestrogen and androgen are the main culprits in crossing the wires of communication between females and males, not because the genders are Venusian and Martian. Communicating on Earth is hard enough, and adding light years between the language barriers will just increase the phone bill.

The most distinctive differences between the male and female anatomy are covered in public, and unless the sun is out, how can we tell if someone is interested in a private dialogue? Rather than face criminal charges, it’s better to look for these signs:

Eye contact is very important when communicating with someone, verbally or non-verbally. Once you’ve established eye contact with someone you want to keep in contact with, keep your eyes in your head unless you want them scratched out, you’re not shopping around for discount bargains after all. Though we’ve all wished for x-ray vision sometime during puberty, not everyone feels comfortable being undressed in public so no staring.

I’m not sure if people play footsie outside of films any more, but feet have nerve endings as sensitive as hands. Those moments of contact hidden under a table, as their eyes are locked onto yours with a cheeky smile on their face, are usually a sign that they are into you. That, or they’re feeling for their shoes they took off earlier. Be wary of feet though, no-one can be responsible for their actions when they’re being tickled.

The second largest collection of nerve endings on both males and females, though the first can be connected to the second with a little maths and a dirty mind. Don’t just pay lip service, pay attention to what their lips, and yours are doing. If you can get them to smile back without saying a word, you’re laughing! If not, then it’s time for the oral language exam…

Yes, in the end you can learn about somebody’s body until you know it like the back of your own hand, but if you want to keep learning, you’re going to have to speak to them eventually! It is hard learning someone’s individual body language, as everyone speaks their own. You will make mistakes, and say or understand the wrong thing occasionally just like with French or German. But if we want to be bilingual, we need to understand another tongue than our own.

The Theory of Attraction – Advice by ‘Mr Smooth’

8 Signs You’re Secretly a Cougar
Get the latest from the blog: