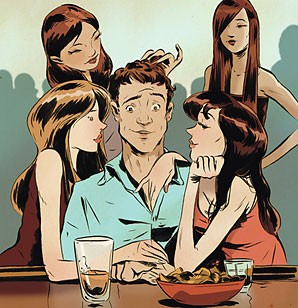 The Theory of Attraction – Advice by ‘Mr Smooth’

Whether dating on or offline everyone has their own tricks and techniques to start conversations and build relationships.

Some believe it’s a numbers game, some just look at photos, some location whereas others simply will not approach anyone themselves.

There is not one formula of how to increase your ‘success rates’, whatever you class ‘success’ to be, however that hasn’t stopped hundreds of people hypothesizing best methods and producing popular books and courses including America’s infamous ‘The Game’ and more recently ‘The Rules’.

After becoming fully immersed into the dating world in business, interest and socially I’ve enjoyed coming across lots of different theories and trying to assess their validity.

Last week James and I met with an incredibly interesting character, who shall remain nameless but for the purpose of this blog lets call him Mr Smooth. This 60-something gentleman has worked in the dating industry for a very long time and freely introduces himself as ‘the dating guru’. Along with a whole host of other cringe worthy lines including him declaring himself as, “…the epitome of what women want.” On our last encounter he shared his main theory of attraction…

Mr Smooth suggested that a dater should approach every single situation as if everyone he or she meets fancies them. In essence, everyone of the opposite (or same) sex goes weak at the knees at the sight of you. As the theory goes you should keep this frame of mind until they explicitly tell you otherwise.

…Almost like ‘innocent until proven guilty’ within the justice system.

For the purpose of research, James and I very dubiously decided to test drive this theory with the hope of learning a little more about attraction and of course hoping to become a little bit more like Mr Smooth who by all accounts everyone loves to hate. So on Friday we left the office in the beaming sun and took a little walk to the local Tesco. As we strolled down the street we tried to embody Mr Smooth’s advice, stomach in, chest up and chin held high. Every time we passed an eligible bachelorette we ensured to establish eye contact, hold it longer than was comfortable, share a few big smiles and we even started a few conversations where appropriate.

So how did it turn out?

Well, I’m not sure whether we were doing it correctly, but after about 10 unsuccessful minutes we decided to switch back to normality as we both felt an uncomfortable sense of arrogance – it just didn’t feel very ‘British’.

Although dubious about the extremity of this theory I do believe that there are some elements that could be a great help when searching for a potential suitor. There is little doubt that most people would benefit from a little confidence boost and Mr Smooth’s perspective certainly gives you that, as well as the incentive to approach more people than usual, ideal for those of you who believe in the numbers game.

Later that night I was out for drinks with some friends and decided to play ‘wing-man’ for a slightly shy female friend of mine. Although I didn’t explain Mr Smooth’s full theory, I covered the basics and convinced her to come and speak to the DJ with me, encouraging her to assume that he fancied her. After a slightly shaky start to the conversation, they were rapidly flirting with one another and it ended in him dedicating several songs to her. We repeated the same approach to another guy at the bar and although sparks didn’t quite fly, my friend said she was more happy to stay out of her comfort zone and was keen to increase the number of ‘approaches’ she made with this perspective.

Now obviously this isn’t enough of an ‘experiment’ to test the theory so I remain undecided to its effectiveness however I do believe that whether or not you follow a ‘game’, technique or set of rules I don’t believe that there is one set of hard and fast rules for everyone. Surely approaches have different ‘success rates’ based on the individuals using them and more importantly each theory is likely to attract a certain type of partner.

If you’re a fan of rules and theories, maybe finding your own theory combination is the way forward, If I was to follow Mr Smooth’s advice, I wouldn’t necessarily flirt with everyone but do love the idea of never telling yourself “They are out of my league” or “She’ll never fancy me.” Maybe the rule is a great accompaniment to the ‘3 second rule’ mentioned in The Game – If you see someone you fancy then you have to approach and talk to him or her within the first 3 seconds before you ‘psych’ yourself out. These two combined could be the foundations of a great way to meet people.

So what do you think?

Is Mr Smooth onto something with this one or has his 60+ years in the dating industry given him a warped view of love and attraction?

Is confidence always a good thing and when is it too much?

And also what is the best way to convey confidence online without coming across as an overly keen and somewhat arrogant cyber stalker?

If you have any theories you’d like us to try out then please do post in the comments or send to [email protected].

Ask Lucy – Post-break Up Bad Advice, How to Understand Love & Being “Just Friends”
Get the latest from the blog: