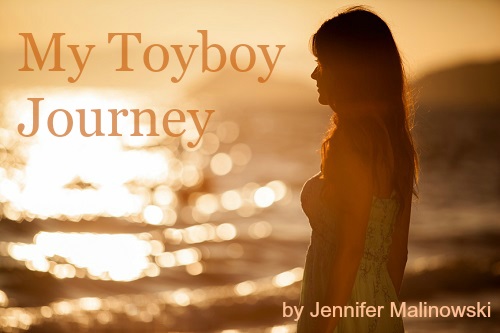 You can vote here!

I didn’t always want to date toyboys. In fact, after my marriage broke down, inviting attention from younger men was the last thing on my mind…

After my divorce, I felt lumpy, bereft, and worthless. But for the sake of the outside world I was consumed with keeping up appearances. The brave face I kept throughout the divorce and settlement meant everything to me. With our family falling apart, I felt I had to keep everything in our home together, running on track, just as normal.

It didn’t appeal to be set up on dates and introduced to single men through friends because I didn’t need a man, or a partner, not even a dog really. I was sure I was fine. Companionship was for people with more time and more emotional needs. Because despite being single, I had everything I needed for company in my daughter, after all. And she would always come first in my lifestyle.

Then my daughter went away to University.

It may not seem that important but as I write this line it carries the emotional weight of what became a pivotal moment in my life. My child was gone, dramatic pause, end of sentence. And she really was gone, as I knew her. She wasn’t my little girl anymore but a grown woman. She still needed me but not in the same way as before. It was then I realised how much I’d always relied on her, her strength and her beauty, as inspiration to go about my everyday life.

So I got a little bit lazy for a while. I stopped taking proper care of my house as it was only me in it. I started eating more, watching more television, socialising less. It took me a very long time to realise it, perhaps because I wasn’t fully aware of it myself, but realised later that during this time I was crying at night – every night. And for the second time in my life I felt abandoned.

It would hurt my daughter a lot to read that, which makes me feel guilty to say it because I’m very happy she lives her life as she wishes, studying and travelling, that’s what I want for her. But for a while I stopped living my own life at all and descended into a state of deep sadness.

A small development at work jolted me back to life again.

As the Outreach Manager for a large Trade Union I’d always felt a sense of purpose from my career, helping people with complicated problems and standing up for important public issues. A promotion made me feel in charge again and I decided to make the most of my moment of increased confidence and join a local gym, something I always wanted to do but felt intimidated by. Soon, working out gave me a powerful outlet for my emotions and the residual stress I had built up over the years. And it goes without saying that my 25-year-old, stunningly gorgeous gym instructor did not hurt this little period of increased optimism either.

Giggling about how cute he was with a girlfriend of mine, she suggested maybe I had a thing for younger men. This didn’t make any sense to me at first, as my husband was actually 12 years older than me. And don’t we all admire beautiful people, whatever their age?

“You need that thingy,” she chuckled, a little tipsy on our favourite Chianti. “That thing the woman on Channel 5 last night said she uses – the Toyboy House.”

“What is a toyboy house?” I asked, envisioning something somewhere between a strip club and a dolls house.

She replied: “Well, it’s not a house, it’s a dating thing, for single older women who like younger men.”

I wondered what she took me for, but before I had chance to ask this question she had catch-up TV on and was proudly showing me a previous episode of Channel 5’s Age-Gap Love. I looked for the mischievous glint in her eyes that would tell me this was all a joke but she watched me intently as I discovered that Toyboy Warehouse was not a ‘Toyboy House’ after all, but a dating site for older women and younger men.

“And what do you want me to do this with this information?” I asked.

“Stop drooling over your gym instructor and start dating hot younger guys who see older women for more than just a weekly workout. Or, you know, for a workout of another kind.” It was time to send her home. So that’s what I did.

Then I booted up my laptop.

“Hmm… Toyboy – what was it…” at first I typed Warhorse. A mistake I’ve made about eighty times since. It must be part of a latent desire to learn more about the uses of animals in warfare. But thank you Google, for always being there to find my intention when my typing skills just don’t cover it.

A few clicks later and I became Rebecca42…

… divorced, looking for men in the Brighton & Hove area. For the more observant among you, you caught me, I used a false name at first. But I wasn’t committed yet. What if someone I knew was a member and recognised me? What if no one on here looked like my gym instructor? These horrors plagued me as I lost my online dating virginity.

It’s a cliché but I was bombarded with messages from the get go. Some a little too saucy, some not saucy enough, but one from a 29-year-old living in a village near enough to my own was just right. He shared my love of Anne Rice novels (they’re serious vampire books, for those of you among the Twilight Generation who still think vampires glitter) and believed in taking a stand for public causes.

We went for our first date to a picket-line protest. He was insanely hot, passionate (which made him even hotter) and – the one thing that’s always truly thrown me head over heels for a man – he challenged me constantly during our discussions.

We talked at length about worldly issues, he told me about the environmental problems the world was facing and how he was working towards fixing energy problems in a third world country as his phD thesis project. I told him about my life experiences, of the places I’d visited, a few of which I would revisit with him during our relationship.

Recently I ended it. Not because what we shared wasn’t real and didn’t matter to me, but because he wanted something serious.

Dating him had reminded me to love myself again, as I saw myself through his eyes, as a beautiful, confident, mature woman with a lot to offer to anyone. This has helped me discover a new main priority in my life – myself. Yes he was breath-taking, our time together was magnificent, but I’m making time for the real love of my life, one I intend to spend a lot more time looking after. That’s a full-time occupation, after all. So if I happen to meet lots of sexy younger men along the way, well, there’s no harm done is there?

And for the future? Watch this space.

Does this blog win your vote for 2 weeks of premium membership? Vote now: [wdpv_vote]

Don’t Fear The ‘C’ Word
Get the latest from the blog: