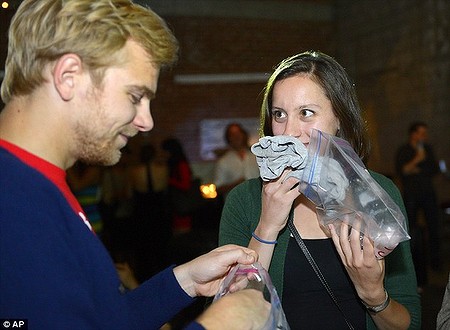 Sniff your way to love? Singles who have attended so-called pheromone parties haven’t ruled it out.

The get-togethers – which have been held in New York and Los Angeles and are planned for other cities – ask guests to submit a slept-in T-shirt that will be smelled by other participants.
Then, voila! You can pick your partner based on scent, or so the theory goes.

The parties started out as an experimental matchmaking fest by a California woman weary of online dating, but it turns out they also have a root in science. Researchers have shown that humans can use scent to sort out genetic combinations that could lead to weaker offspring, apparently.

Konstantin Bakhurin, a 25-year-old neuroscience graduate student, said he bypassed the bags that smelled like baby powder or laundry detergent or perfume in search of something more unique: the owner of a distinctive yellow-T-shirt whose fragrance he described as ‘spicy’.
‘I think it’s probably a bit more pseudoscience,’ said Bakhurin, who attended with two fellow graduate students from University of California, Los Angeles. ‘I just kind of came here for kicks to see what would happen.’

The parties are a marked contrast to the proliferation of online dating sites, which demand countless details from singles, and in some ways are taking romance back to its most primal beginnings.
Judith Prays, a web developer who now lives in Atlanta, said she came up with the idea for pheromone parties after she failed to find a match online. Prays said she’d date men for a month or so before things soured until she started seeing a man who wasn’t what she was looking for and wound up in a two-year relationship.

What she remembered was his smell.

‘Even when he smelled objectively bad, I thought he smelled really good,’ the 25-year-old said. ‘And so I thought, OK, maybe I should be dating based on smell?’ At first, it was an experiment. Prays invited 40 friends to a party in New York and asked them to sleep in a T-shirt for three nights, put it in a plastic bag and freeze it, then bring it to the party. Bags were coded with blue cards for men and pink for women and numbered so the shirts’ owners could pinpoint their admirers.

The night was a hit, Prays said, adding that half a dozen couples hooked up and one pair formed a relationship. Since then, she has held similar parties in New York and Los Angeles and is planning others for Atlanta, San Francisco and perhaps elsewhere.

Karen Arellano threw back her head and laughed after trying a handful of bags that reeked of sweat, coffee and even weed – but said she didn’t really come to the party in search of love. ‘I don’t think I’m going to find anything more than, “Hi, how are you,” a conversation,’ the 29-year-old baker said. ‘That’s expectation enough.’

Prays said she’s also learned from the experience that while scent is powerful, it isn’t enough to detect a good match.

After all, what happens if you love the smell of someone’s T-shirt, but the person themselves does nothing for you?

The sooner science stops categorizing us as animals at our base, the better!

Are you a love saboteur?

Love is in the air: Video Valentine’s Event Goes Down a Storm