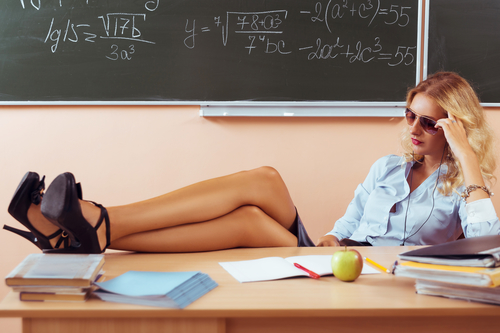 I blame Anne Bancroft. There she was, looking like a sexually sublime schoolmistress in The Graduate, asking the gauche Dustin Hoffman “Would you like me to seduce you?”, and the die was cast. All older woman can teach younger men how to become better in bed, a fact which arrives in the post along with your Happy 40th! birthday cards.

While the idea of sleeping with someone simply for the experience isn’t gender specific (hello, all you groupies out there with treasured band t-shirts you still sleep in), it’s definitely a trend amongst articles about dating older women. We’re sexier and better in bed apparently, with a guy “hard-pressed to find a better tutor” for some of the best sex of his life. From having more notches on the bedpost, to more practise between the sheets, to being eager to teach and more confident generally, older women are touted as the ‘been there, done it all’ gatekeepers to a toyboy’s greater sexual satisfaction. Who wouldn’t love to be sent spinning around the bedroom by Kylie, for example?

As an older woman myself, all I can say is .. phew. Intimidating, much?

Yes, I may’ve become sexier and more body-confident as I’ve grown older but dear God, the sexual prowess others confer on me through age alone is a hell of a lot to live up to. I may know what I want in bed but insecurity strikes all of us (especially with someone new; come on, who hasn’t nearly exploded from trying to hold a fart in for too long?).

There are times when I read my messages from younger guys and wince; between the lines I can sense the story in their heads. A story which makes me, an entirely human bag of chemicals, frailties and squidgy stuff, into some kind of sexual granter of wishes. They look at me as a means to a (sticky, visceral, able to repeat on demand) end; I look at me and know that I hog the duvet, laugh like a unplugging drain and, on balance, would far prefer a nice hot cup of tea.

And I’m not alone. Young men may have it even harder (stop sniggering at the back, you); thought to be in their sexual prime, I’ve lost count of the guys who’ve told me about the pressure to perform. Maybe that’s one big plus for younger guys who sleep with older women; they’re more likely to console you than scold you for your unaccountably fallible phallus.

So here’s to you, Mrs Robinson, for setting the bench so high. And here’s to the rest of us; ordinary mortals with fears, hopes and insecurities who can still manage to dance whilst they limbo beneath it. There’s probably a lesson in there somewhere.

Can Your Toyboy Be “Just Friends” With Other Women?
Get the latest from the blog: