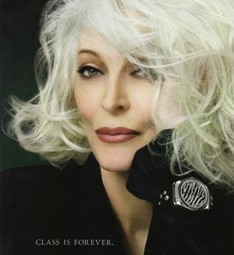 Age gap relationships have been around since time began, the more common being an older man and younger woman, and these are generally pretty well received, unless the difference is insanely vast, or it’s obvious the older man only has the company of his younger woman because of his bank balance.

The reverse – older women and younger men – hasn’t always been so well received. Indeed, although it’s occurrence is on the rise, as well as general acceptance of it, people are still all too ready to view this pairing with suspicion. And if the relationship breaks down, as relationships often do, regardless of age, it’s blamed on the woman being older, as has been the case with the recent split of Demi Moore and Ashton Kutcher.

However, relationships developing between older women and younger men is on the rise, and this is mostly due to its obvious benefits. Here are 10 of them we found in an MSN article on the subject:

One of the most admirable qualities of older women is that they tend to be more independent, more comfortable in their own space, and therefore, less needy.

Chances are she will have experienced being in and out of relationships before, and will be less likely to demand you are with her or in constant contact with her or that you are welded together 24/7. Being desired is great, but clingy is awful and she will be cool enough not to do it.

Most of us do not wish to be pushed around, but neither do we wish to decide what to do all the time – or to spend our waking hours trying to second-guess someone. A more mature woman (especially those dating a younger man) is likely to have a clearer idea of who she is and what she wants.

This can be liberating for both of you, not least because she is less likely to waste time playing games when she knows what she wants – and whether or not you can deliver. She will cut to the chase while her younger, more timid sister is still playing hard-to-get.

Admittedly being more forthright and self-aware can make anyone – male or female, irrespective of age – boring and horribly opinionated. But hopefully with age comes knowledge and sophistication, two crucially important qualities when it comes to being good company.

Most of us fail to notice a good conversation, being happily engaged with the subject matter (and the person talking) rather than analysing what is being said. We notice the bad ones though, and so often the speaker is young, gauche, unsophisticated, lacking in self-confidence, and so so dull.

Older women tend to earn more money than pretty school leavers. That sounds mercenary and, in a sense, it is. But only because in this day and age, one can understand why any male may quail slightly at the thought of picking up the bill every single time.

Clearly it is to be hoped that most men will be gentlemanly, and be chivalrous and traditional enough to do the decent thing when the two of you are out on the town. But it is useful to know that, going forward, she may occasionally return the favour – even if you graciously decline.

This doesn’t mean that she’s a meal ticket though, and will be happy paying the bill every time!

Being more grown-up means doing more grown-up things. Sometimes older women will let their hair down, and some may occasionally exhibit vaguely wild-child behaviour. Mostly though they will want to avoid becoming paralytic and throwing up, or cramming onto a deafening dance floor with another 10,000 sweaty bodies.

Which is as it should be. One of the most important things about dating is getting to know each other, which takes time, patience, and peace and quiet. Where better to start the process than in a smart restaurant, offering good food and discreet but attentive service?

Logic suggests older women will have more experience of relationships than younger ones, meaning she will be better able to handle the inevitable ups and downs. Because of this you can expect someone more measured in her responses and less likely to fly off the handle at the first sign of trouble.

The chances are she will have more realistic expectations too, which must help boost the odds when it comes to your relationship’s long-term survivability. Assuming that your own expectations are similarly reasonable, that is, and that you resist the temptation to take the mickey.

It is good to meet your girlfriend’s pals and to get on with them. What you want to avoid, however, is being forced through hoops because – unsure of her own judgement – she won’t commit to you until she gets the seal of approval from everyone she went to school with.

Greater self-reliance and independence mean an older woman is much less likely to seek her friends’ advice.

She may well ask their opinions and listen to them. But ultimately she will trust her own judgement, recognising that others are not necessarily expert when it comes to knowing what is best for her.

Experience and maturity mean older people are less likely to wallow in disasters. This might just be because they have been there before – your first failed relationship can feel like the end of everything, but subsequent disappointments are rarely as bad – or just a recognition that life must go on.

By contrast, younger women seem to have more drama in their lives and many revel in the disruption which can be exhausting for others. Eventually even the most compassionate boyfriend will resist getting dragged into yet another crisis – and start looking for someone with a more relaxing style.

Very much the big one and invariably the most commonly cited reason younger men are attracted to older women. And why not? By now we are all old enough to blush at the ineptitude of those early fumblings and to recognise that we get better the more we practise.

With more going on in her own life and career, a greater sense of herself and a much better idea about what really matters in the world, an older woman is less likely to mess you around and more likely to value the time you spend together.

A cynic might say she has tried what else is out there and simply knows a good man when she sees one. If you are lucky enough to be that man be sure to reciprocate – and to let her know that you take her seriously too.

Older women: a Finishing School for Sex?
Get the latest from the blog: