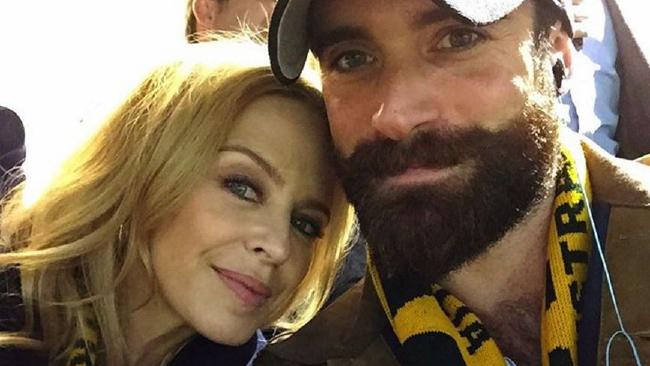 Toyboy has Kylie spinning around on her Desert Island Discs

Kylie had good cause to remind herself to breathe this week when the Aussie Aphrodite found her breath taken away by her toyboy.

In a first for Radio 4’s Desert Island Discs Minogue, 47, gave the choice of one of her eight tracks to her “new beau” and “huge fan” of the show, 28 year-old British actor Joshua Sasse.

“I would like to have a surprise from Josh,” she tells presenter Kirsty Young. “I don’t know what he has done, but I figured if I was a castaway on an island, I would like to know what someone else thought, particularly my love.”

So, did the young Sasse show some sass? It would be so easy to flatter her with something from her back-catalogue. Something that tells her she’s just smart, or beautiful, or sexy.

“I would bend to press my eager face into your neck, where the secret flesh is furred like peaches behind a curtain of caramel scented curls. Without asking, I would pull you down with my devoted hands to express, my fluent tongue to endear. We would smear our mouths with ardent kisses and cry aloud from loving, as we lay beneath the arches of that careless wanton day.”

No wonder “I think I stopped breathing for half of that. Breathe, Minogue!” was her emotional response.

Desert Island Daters: Essentials for Anyone Dating in 2020

Wendy: What are the benefits of toyboy dating?

My Toyboy Journey
Get the latest from the blog: