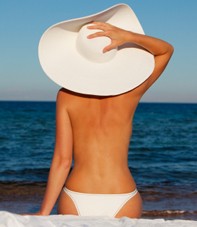 Just got back from a long weekend in Mallorca.  My knees ache from dancing until 5 am every night, I am sunburnt through what’s left of my St. Tropez. and I’m feeling a little bit like the cat that ate the cream…

I went out there for a long weekend with one of my dearest friends.  It was a big birthday weekend for her and she wanted to party in a place where people actually don’t care where you come from or how old you are.  Folks just want to sit in the sun, drink ice-cold white wine, wear skirts that are too short and have a great time.  For those of you who haven’t been, its Magaluf.  Yep, home of stag and hen weekends, more tattoos than you can imagine, and lots of shaved heads attached to fit as butcher’s dog men.  Its like holidaying in an episode of Gavin and Stacey abroad and its wonderful.

We arrived on a Thursday night and immediately made friends with the very tasty Scottish boys that lived next door to our room.  Our TV didn’t work. They were all 22’ish and adorable.  One also happened to be an electrical engineer.  He came over and fixed our TV and we all had a few drinks together while getting ready for going out to The Strip.  Well, they adored all us gorgeous older women and we them.  They knew it was just banter and that there would be nothing more than a giggle and a few drinks, but we all just hit it off.

So the next day when we decided to join the BCM day boat party (the warm up to the Foam Party that night), it was great to see them on the boat.  They danced with us, we all bought each other rounds of drinks and by the time we got back to shore, we were ready to go.  And it was on the boat, standing near our cutie toyboy neighbors that I found myself on the receiving end of a tractor beam stare from simply, the fittest, dark haired, 6’4” toyboy.   As we were leaving the boat he asked me if I was going to the foam party.  Yes, of course.  He looks at me and says: I’ll find you.

Didn’t think a thing of it.  I was thinking more about the very cute DJ (with a wicked Northern accent) running the music on the boat and getting a CD of his music for my son who I swear is a David Guetta in the making.  Off we all trot to the foam party about 11pm.   We had a few drinks with the little Scottish chaps at the room, went to the club and got some great ringside seats by the dance floor and then after about an hour and some tequila, hit the floor.  There were some super creepy locals that wouldn’t leave us alone and I went to find security.  One lot of creeps gone, and another took their place.  I was getting bored.  So was the Birthday Girl.  And blow me down.  The guy from the boat was there.  Right in front of me, arms either side of me dancing.  Protecting me.  His handsome mate was taking care of the Birthday Girl and we commenced to some serious dirty dancing.

It was just so much fun to let go and dance like I was 20 too.  Just let go and feel all the music and the goodness of the moment. Things I should have been doing 20 years ago too.  My view was, in a white mini skirt, size 12, I wasn’t doing anyone any harm and myself the world of good.  And Jack was a great dancer who just happened to have taken his shirt off at some point during Insomniac.  Well I was a goner and as he bent me down into a back arch, hips pressed together I came up from that, saw his chest like a washboard and was like: oh yeah, good idea.

And I looked up at him in the middle of this heaving club of bodies, moving like one to the music and arched my eyebrow… and bent down and holding his gaze, ran my tongue from his belly button up to the little dip at the base of his neck.  Then the foam came pouring down over us and we were literally drowning in the stuff.  He held my hand tight and covered in neat Fairy Liquid we danced like maniacs, my flip flops were long gone and we were drenched in sweat.  It was a moment that everyone should have.  Pure natural euphoria.

Just when I didn’t think it could get any better, a massive guy, falls into us and almost rips off my toenail.  I saw stars and was pretty sure he’d ripped it off.  I told Jack I needed to get a plaster.  He snapped into action.  Amidst foam and 2,000 writhing bodies, he gets me off the dance floor and to the coat check where there was a first aid kit.  He took my foot, checked the toenail and applied said plaster.  He was a dreamboat.  Then of course we went and danced for another two hours.

About 5pm then next day, warm and sandy on the beach, I got a text.  It was from Jack wanting to see me that night.  We had made plans to go to Pacha in Palma Nova so I texted him suggesting maybe another time…

We didn’t go to the club.  I texted him about midnight to ask him where was. He was told me and we were in the same club.  We danced again, a lot.  Then we started kissing.  We left shortly thereafter and walked on the beach.  He told me about how he is studying to be an engineer and he asked me about my life.  We sat on the beach for hours just talking and kissing and it was a Bobby Ray night.

As ya’ll may have guessed, the reason I haven’t been writing is because, for the last 6 months I have been hard core husband hunting.  And Jack, was such a wonderful break from all the seriousness of ‘The Rest of My Life.’ I have been out with about 3 men in their mid 40’s because (though I hate to say it) I want to make a new family, get married, but its just stressful and loaded with baggage and not a lot of fun.  It’s too loaded, too serious, too much like hard work.

Jack was just so easy, so good and as much as you do on holiday in Magaluf, he worked for it.   Fair play.  He thought it was wonderful and so did I.  I never expected to hear from him again.  Kinda like it is in Vegas, what goes on in Magaluf stays in Magaluf, but about a week ago, out of the blue, I received a text that read:

When can I see you again?

I replied: Not sure, but why the hell not?

But, but, but.  What should I be doing?  Three years the other side of my divorce, I am meeting men in their 40’s that think I should be lucky to have their attention and I just want to scream, fellas, my two toyboys (for the last 9 months) and Jack are hotter right now than you guys will ever be and they think they are lucky to have me.

So, am I sick of husband hunting?  Hell yeah I am.