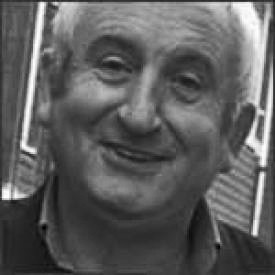 Not all older men are boring: a chat with the founder of The Big Issue

The following is an interview with John Bird, founder of The Big Issue, which took place at The Groucho Club on Monday 6th Dec, with questions asked by Julia Macmillan, founder of Toyboy Warehouse.

JM: “You come across as very English, John. Tell me something about your background.”

JB: “My family is London Irish and my grandmother was Spanish. When I was in the prison system, where I spent many a happy year in my teenage years, I was known as The Romany.”

JB: “Dark curly hair with a hooked nose. I’ve never really looked English so haven’t felt English and have no sense of reserve.”

JB: “I am an absolute pain in the arse.”

JM: “How did you start The Big Issue?”

JB: “I started The Big Issue almost 20 years ago with Gordon Roddick who gave me the money – and now I’m stuck with this big baby that just gets bigger and bigger. It’s all over the world. We’ve now got a bank.”

JM: “Do you still enjoy running it?”

JB: “What I enjoy now is writing and I’ve been doing a lot of drawing lately. I really enjoy creative stuff, but am still really into social justice.”

JM: “Yes when I met you the other day what struck me is that you are someone with a passion, but also a lot of humour.”

JB: “Yes I’d say I haven’t got a straight, as in not funny,  bone in my body.  I hate namby-pamby political correctness. I like to say it how it is. I tell them they are c***s, which you know what that means? Can’t Understand New Technology. What’s that, an aphorism?”

JM: “An acronym,” laughs “I think you said you’re really a working class Tory but wearing the corsetry of Liberalism means that every now and again you have to take it off. So you have to whip off your corset?”

JM: “So you’re not for too many benefits?”

JB: “No. Whenever I’ve been given benefits, I’ve lain on my back with my toes curled waiting for another benefit.”

JM: “So do you think it’s right what The Coalition is doing?”

JB: “Actually I’m launching a paper on December 15th called “Social security versus Social mobility: the big issue for the coalition government.” It’s my Christmas address. If I offered you social security or social mobility which would you want?”

JB: “You can’t have both. Social mobility comes through education.”

JM: “So what do you think about the tuition fee debate?”

JB: “University education is the preserve of the Middle Classes. If you’re in the Middle Class you get the education, then you get the jobs. Here they are rioting because someone has said they should pay for their education instead of saying ‘Hang on, the working class is 73% of the population and yet only 19% of them go to university. We’ve got a jolly unfair advantage. Maybe we should shell out for those f*****s so they could join us.’ That’s my view.”

JM: “How do you define working class these days?”

JB: “Working class is anyone in an unskilled or semi-skilled job and 73% of the British population fall into that category.”

JB: “What I said to David Cameron and IDS before the election was that we should give a Rolls Royce service to the poor because they cost us an absolute fortune when it goes wrong. I was in the prison system and at the time I was in there it cost £63 a week to keep me in a reformatory and a few miles down the road was a private boarding school called Charterhouse and it used to cost £32 a week to send a boy there. When a family falls to pieces because they are not good at organizing things, like my parents who couldn’t organize a piss-up in a brewery, it cost the state much more than it would have done to turn me into a Middle Class geezer.”

JM: “The Welfare State is at fault?”

JB: “Not so much the Welfare State but Margaret Thatcher screwed it up because when she stopped the subsidies for the lame duck industries, and when Willie Whitelaw said ‘What are we going to do with a million workers?’, she said ‘Let them have benefits.’ So she started the whole thing of parking people on benefits. While she helped social mobility by enabling people to buy their own homes she also damaged it with the benefit system.”

JM: “You think they should have invested in education instead?”

JB: “Yes. If they’d done that, they wouldn’t have this no-man’s land of no-hopers.”

JM: “OK John, I want to get onto your attitude to women…”

JB: “If you met a woman who had as many relationships with men as I have had with women you would call them a slapper and I think it’s the last frontier that women have to put up with. So many men I know are about controlling women.”

JM: “Exactly! It tends to be older men trying to control them, that’s why more and more are dating younger men.”

JB: “Like Robbie Burns, for example, who was always writing about *Scottish accent* going shagging bonnie young lasses but if the lasses wanted to go off and do it he’d hate them. I have been trying to get rid of jealousy and possessiveness all my life.”

JM: “Don’t you think they are part of human nature?”

JB: “It’s part of human nature to s*** under a tree but we don’t do that anymore. I have behaved badly in the past like hitting some guy that I thought my girlfriend at the time was looking at, only to find out later that I’d hit the wrong guy. When I got married again 6 years ago I spent my first year being jealous of her previous boyfriends. So I have spent the last few years learning and trying to change that. I’m 64 now and I want my Missus to have a good bunk-up when I’m not around.”

JM: “Well, you told me you are going to leave her a membership to Toyboy Warehouse in your will (laughs).”

JB: “Yes! That’s the idea! I want her to have fun and why should men be women’s sexual gatekeepers?”

8 Reasons Older Women Love Scottish Men
Get the latest from the blog: