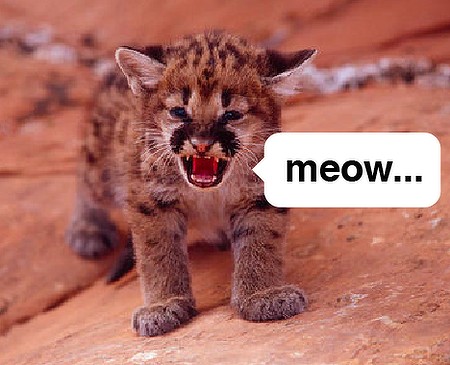 I am Cougar. Hear me… Meow?

What do you call a woman over 40 who’s attracted to younger guys? Yup. You’ve got it. ‘Cougar’.

I don’t know about ‘birds do it, bees do it’, but it certainly seems that an increasing number of female celebrities are doing it.

From something that once only made the lurid end of the media spectrum (“I’m 81 and my husband’s 18!”), it’s now impossible to check out a red carpet without finding a sleek and glamorous 40/50/60-something with a younger man on her arm.

From Julianne Moore to Jennifer Lopez, to the high-priestess of sex herself Madonna, to the perennial poster-child of cougars everywhere Demi Moore, those toned bodies and that expensive hair are impossible to ignore.

Also hard to ignore are the articles explaining why more and more men like older women. It’s because they’re financially sorted, fashionably sophisticated and confidently in control. Or they’re in a bar (dressed well below their age and being ‘raucous with their friends‘) with, quite frankly, little compunction in dragging you off to have their wicked way with you.

It’s a teeny bit intimidating. It’s also a huge amount to live up to.

(And, don’t tell anyone about this, right? Because, between just you and me .. I don’t.)

OK; if you squint, I might look the part (oh, cheap box of hair dye, how I love you). And I’m wholly guilty of dressing in clothes designed for someone much, much younger (age 13-14 skinny jeans, FTW! No, wait, that’s not what they mean, is it?)

Being stereotyped as an ‘experienced, sexy, sophisticated’ older woman is .. well, let me put it this way; I’m more likely to be found lingering in a library than lounging in lingerie. My version of ‘sophisticated’ means I’ve recently stopped tucking my napkin into my neckline. And the closest I get to international travel is cruising the ‘around the world’ food aisle at Sainsbury’s.

In fact, I’m so much of a not-cougar that when I joked with a guy that he should ‘return me to the store’ and ask for a refund .. gentle reader, he actually DID that (lesson learnt: never even JOKE about that kind of sh!t, people.)

With the number of age-gap relationships increasing year-on-year, and the notion of such partnerships becoming the norm amongst us ‘civilians’, I’m planting a flag in the sand here, folks. Standing up for the quieter kitty. Yup, that’s right. Championing less claws, and more curiosity. Less cougar, and much more Felis Domesticus.

Because this lady’s feline fine about preferring younger guys. Just don’t label her as a cougar. OK?

This blog was written by a Toyboy Warehouse community member.

So are you a Cougar or a Kitty? Join in the discussion below or on our facebook page.