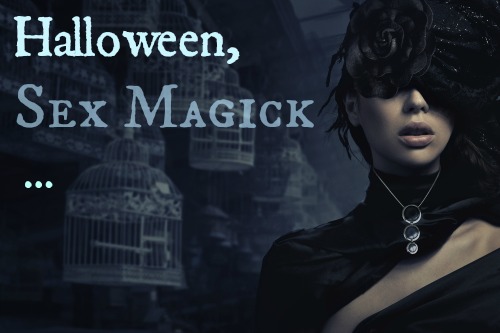 As we approach All Hallow’s Eve and the witching hour, I thought I would reflect upon an ancient concept, one which although archaic, is is still held sacred by some today.

Sex Magic (or Magick) however it may be spelled, is the idea that there is a special power attached to the primal sex drive and act. Sexual activities, orgasms and carnal pleasures can lead to the production of magical energy, which some believe can be used cast spells and forge concrete changes in the real world. Another aspect of this is Tantric yoga, which centres around the power of sex to release and develop the consciousness- awareness of the hidden world surrounding us. All of these beliefs possess their own special rituals and exercises for devotees to practice. However curious about these matters, I am no expert and lack any experience of such incidents. Having said that, I do find the idea of such a phenomenon as magical sex to be extremely compelling!

We are certainly exposed to many instances of the dark power of sex, in art, drama and documentary, but little of the other side, the working of that forge smelting fire and light which occurs with really satisfying sexual encounters.

Sexual energy is such a natural, mystical, overpowering force with its own peculiar momentum, dynamic and occult features. Only suppose that every time we were in a sexual encounter, we gave ourselves to each other and the experience utterly? If only we could set aside equivocation, anxieties and other worldly intrusions to breathe a purer air, free of distraction, full of sensation and nothing else? Imagine if we could abandon self-consciousness and replace it with absorption in the other, finding in mutual trust and abandonment a new power and liberation? Who knows what powers of nature would be set loose to forge irreversible change in our lives?

That, to me, is what ‘Sex Magick’ is fundamentally about, the potential of sex for positive, constructive change. I hope you all find some of your own this Hallowe’en!

Halloween Dating: Haunted by you

5 Untold Reasons Why Men Crave Older Lovers
Get the latest from the blog: