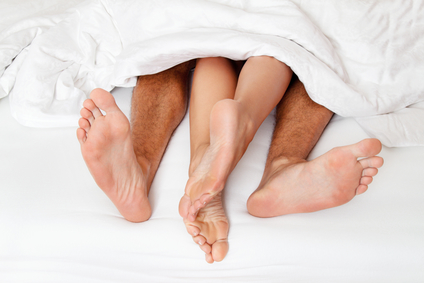 In the gleaming, glorious, Golden Age of Antiquity sex was viewed very, very liberally. In the Middle Ages it suffered profound suppression to the point where it was synonymous with distraction from God and, in turn, celibacy was celebrated. Now here we are – in the post-renaissance present age, free from most stigma and negative connotation about intimacy; and there are so, so, so many reasons to engage in the terrifically tantalizing thrill of great sex daily!

You’ve had a tough day at work, one of those where anything that could have gone wrong did go wrong. After an eternity in traffic you arrive home, your lover is soon over to greet you. They make everything suddenly OK, your antagonists are insignificant when you’re in their arms and their lips are on your neck. So you go to bed. Together it’s building and building, the cacophony of passion, the physical recompense to all the conjunction of your hot bodies… then it happens. The release. All that passion and tension gone and with it the stress of the day.

Above all, sex is a magnificent way to discharge yourself of stress. It’s scientifically proven that orgasms are healthy and are even linked to a long-term reduction in high blood pressure and other symptoms of stress!

“Working out” with your lover is every bit as good as working out at the gym, every muscle in your body is being used; even when you start to feel tired – even when you feel the fatigue, it’s easy enough to keep going.

One of the most prolific health benefits of sex is the work-out component behind it. There are varying estimations on how many calories are actually burnt in an “average” sex session – however long that is – and of course there are so many variables in play but the general consensus is that you may burn as many calories in flagrante delicto as jogging for 15 – 30 minutes.

It was believed in ancient China that sex had a direct correlation to longevity in old age and could even extend someone’s life… indefinitely. Emperor Qin Shu Huangdi had sex every day in his quest for immortality. Unfortunately everlasting life isn’t one of the numerous benefits of daily sex but there is compelling data that suggests those who have active sex lives live on average 3 – 7 years longer than those who don’t and it can even decelerate the skin’s ageing process. All in all, just one “quickie” a day can make you look and feel years younger!

With the stress of the day behind you, you feel somewhat euphoric, blissful. Your problems still exist, but they do not trouble in this serene post-orgasm moment. Sleep easily falls over you…

In a bio-chemical manner of speaking an orgasm is an amalgamation of nerve signals and hormones all firing and flying through your body simultaneously.  One of the many hormones released during the “magic moment” is called… wait for it, Dehydroepiandrosterone or “DHAE” for short. This tongue twisting hormone sharpens the immune system, aids in tissue repair and nourishes skin. Other body chemicals synthesized during sex and orgasm include endorphins. These lovely fellows act as a natural anti-depressant by boosting your mood, reducing perception of pain, improving quality of sleep, combating anxiety and, going back to the where we started, reducing stress. Play keeps the doctor away!

To keep it fair this point is just for the ladies. Inherent to the female orgasm is the contraction of the uterus, as the uterus contracts and expands it expels fluids which essentially wash away matter which can inflame the uterus and cause cramps during menstruation. If you have an orgasm whilst you’re on a period the contraction of the uterus will force the nutrient rich blood to be released faster which can decrease the duration of your menses. When a lady orgasms some of the hormones that are released help to regulate ovulation and cervical fluid which translates into heightened fertility.

I mean this both physically and metaphorically. Sex everyday counts as cardio. Research suggests that having an orgasm at least twice a week significantly reduces the chance of having a heart attack and strengthens blood vessels leading to better circulation and all the health profits that come with it.

No, that’s not a euphemism… Sex hormones released when you hit the “big O” reinforce and strengthen bones decreasing the possibility of suffering from a hip fracture or brittle bones later in life. The thrusting involved in sex helps intensify muscles in the pelvic region which can only be a good thing.

We’ve all experienced that moment when after the climax we look back at our lover, kiss deeply and with increased familiarity and it feels closer and better than ever. The release of Oxytocin during sex (the hormone that women also release when having children) adds to a feeling of bonding and intimacy. Entirely at ease, you feel so safe and loved.

Bio-chemicals that are released during sex are also released when we are experiencing feeling of attraction or even being in love.  Ergo it is to be expected that you may feel very emotionally close to a partner after sex. Frequent sex has been confirmed to enhance relationships and to fortify emotions of attraction between couples.

Altogether, it’s very common to feel reinvigorated and replenished in body and soul after a night of activity.  Not surprising when you take into account all the benefits mentioned in previous points. Remember loving, consensual sex is a human right; everyone deserves to feel good and healthy. Don’t feel – or let anyone make you feel – guilty about having what you deserve!

10 Great Things About Dating Older Women
Get the latest from the blog: