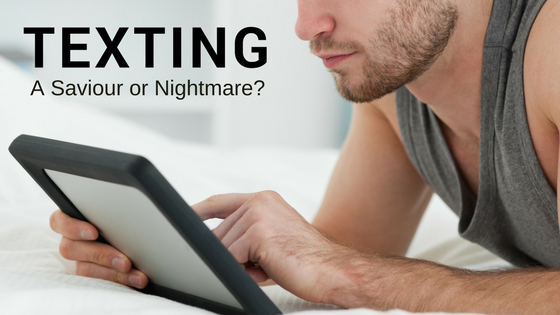 In the growing technological world more and more people spend most of their time talking through via text. Not so much as a phone call now but a text. Texts are easier, faster and cheaper but not so useful for full blown conversations. Especially with newly blossoming romantic interests a text isn’t as simple as a conversation, it is a carefully orchestrated battle in which each contestant attempts to make themselves look cool, funny and attractive. The problem is the time, there is too much time to think about your reply. I’ve met people who actively check their reply with a friend to make sure there’s nothing wrong with it. It’s unbelievable, a focus group for text replies.

With a real conversation, unless you want to come across as slightly broken, a response is expected within at most 5 seconds. A text response can be hours or even days, organising a coffee with a friend can take so long that there’s no point by the time they reply. To add to the cons of texting, having to tap away a paragraph is an arduous experience, whereas a quick phone call is simple and to the point.

A few of my friends have begun to seriously like girls by the majority of conversations through texts or facebook, they talk for days and days… by text. It’s ridiculous, everything can be hidden, every sentence is constructed and so no response is ever really true. It’s not you replying but the person you think they would fancy.

Most of us have likely seen the TV show “Catfish” where online pen pals track down their internet lovers and more often than not discover their soul mates are not quite what they expected. The most recent episode I’ve seen, a man travelled across America to find his tall beautiful, blond internet girlfriend only to be informed she’s actually a 300 pound man called Steve. I know that texting a girl or guy you met at a bar isn’t as bad as “Catfish” but don’t rely on just the text, it will fizzle out fast.

The text to actual social interaction isn’t a tricky evolution, you’ve already sparked their interest so just be forward. Ladies you can also initiate it as well, this is the 21st century. Ask them for a coffee or an alcoholic evening drink or if you’re feeling especially nervous, organise a group meet “A few friends and I are going to (Local bar) tomorrow night, grab a few friends and come along”. The best part about the group invite is that there is no pressure, it doesn’t have the label of a “Date” but we both know the only reason they’re both there is for each other.

We live in a hugely technological reliant world and a lot of the techy stuff is brilliant but not the texts. You will learn more about each other in one night of face-to-face interaction than a week of that online chitchat.  This could save so much time, you could quickly realise that they aren’t for you, instead of floating along imagining the person on the other end of the text is your soul mate.

Top 5 Toyboy Dating Mistakes
Get the latest from the blog: