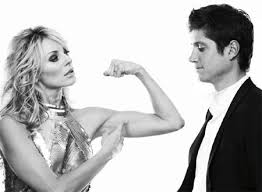 Women can wear trousers in a relationship, and men can do the same. But in bed, it doesn’t matter what clothes you wear, just so long as they’re strewn about the room.

With men and women on more equal footing (or bedding), what happens to the archetypes of men and women in a modern day relationship? If women are having sex with the carefree abandon associated previously with men, can men have sex like women? Will men go make a low-fat Philadelphia and smoked salmon bagel after the woman has rolled over and fallen asleep?

The double standards of ‘the rules of the sexes’ can seem unfair and infuriating, for both teams. If a woman sleeps around with a man she’s deemed a ‘slut’, if a man sleeps around with women, he gets his back patted and drinks bought for him at his local boozer. Women have been trying extremely hard to readdress this balance, and surprisingly men are in no rush to change the rules they’re benefiting from.

The trouble is that men like to consider themselves in control, in a relationship or anything else for that matter. When things get tough people say ‘Be a man’ not ‘Be a woman’. But when you consider most men put their penises first, they can end up coming across a complete cock. Women are just as capable as taking control as men, but I think there’s a real fear in every XY chromosome carrier that the XX’s can and will prove more capable than them.

Women can act and dress like men, get respected jobs in their field of expertise without the aid of men, but men can’t act like women. The only times I’ve seen blokes in a dresses were at pantomimes and an Eddie Izzard gig, but I do come from a small city after all. A man in drag is still considered a point of ridicule, especially in Widow Twanky’s case, but is it because men still find the idea of being a woman so ridiculous? Because women find the idea of men being like women so ridiculous? Or is it because he shouldn’t wear those heels with that dress?

The truth is men don’t think with their penis, but they do use a disproportionate amount of brainpower thinking how to use it. Sex feels great no matter what sex you are, but sex is where women will always have the advantage over men.

Some guys will only know of one erogenous zone on their body, the one they’ve been playing with before they knew what it was, and those kinds of guys may think the same of their partner. Even though men and women are basically the same model of homosapien, the wiring is entirely different on the XX model. There is no ‘one’ erogenous zone on a woman, every inch of skin can be an erogenous zone when you know how to find it, orgasms can be patient or passionate, and to top it off, women’s orgasms can come in a multitude! It’s unfair, the only consolation men have is being able to give that fabled multiple orgasm.

Thinking like a man won’t grow you a penis, and thinking like a woman won’t make a vagina appear either, but considering every part of your partners body in your mind can lead to that mind blowing orgasm for both of you.