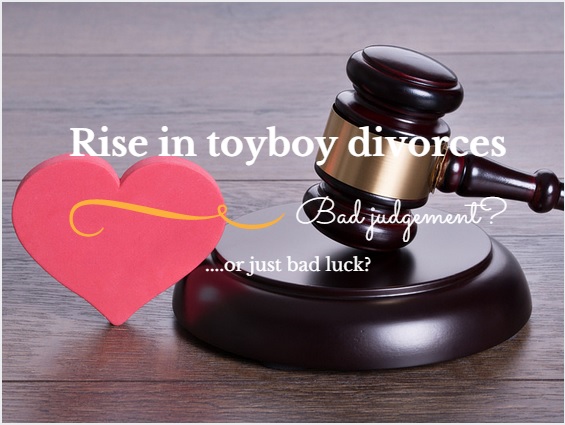 A law firm notes a rise in toyboy husbands filing for divorce; is it ‘game over’ for the cougar wife? It can feel like a modern-day rite of passage for a younger man to date an ‘older woman’.

Sometimes it’s born of curiosity; is it really true that cougars have higher sex drives and are more confident in bed than a toyboy’s female peers? Sometimes it’s to fulfil a cherished fantasy; you legion of sexy baby-sitters and teachers, burning a heady blend of authority and arousal into the young male mind. And sometimes it’s just love; who cares about chronological years when a soul (and soul-mate love) is eternal?

For while some liaisons are always destined to be brief (and leave as much imprint as those briefs on the bedroom floor), others are called to walk down the aisle.

Statistically, older husbands are still more common than older wives. But the most recent figures from the Office for National Statistics in the UK shows that 8,760 men aged between 25 and 34 married women older than themselves in 2012, a rise of 2.5 per cent in a single year.

So, more weddings. Bring out the confetti! But it seems that there’s a bad fairy to spoil the proceedings.

In this case it’s a law firm who declares a rise by a third in the number of divorces filed by younger men against their older female spouses in the last three years.

The law firm notes that marriages between a younger man and a more successful older woman have become more frequent in the 21st-century. Yay, equality. Right? The marriage may more easily break down, however, when the younger man develops or uncovers a desire to father children, just as his wife is entering middle-age.

“Although these cases are not as common as marriages and divorces in which men are the older of the spouses, we have seen a definite rise in such matters in recent years.” Read more

Marriage .. can be tough. Ask any older woman who’s gone through it and barely reached the other side. And marriage when you’re young .. can be even more difficult. Ask anyone who got hitched in their twenties, before they had a sense of who they really are, and found they had a ‘starter marriage‘ on their hands.

A sense of shaming pervades the coverage of this topic; how dare older women be so foolish as to fall for someone younger, and imagine it may last. The utter folly!

At a time where we’re living longer, changing careers, changing location and reinventing ourselves through more choice and greater freedom, isn’t it time to use a new yardstick to measure relationship success by? To measure by depth, not duration?

Because no relationship is a failure if you grow because of it.

A younger man may end a promising romance when he starts to feel something more than initial lust, because he thinks that there’s ‘no future’ in it; an older woman may smile, having gone through so much more and thus knowing how fleeting happiness is a gift to be embraced and given wings.

We learn who we are, discover ourselves, find (and, hopefully, heal) those aspects of ourselves left wounded by earlier experiences in the crucible that is a relationship. Whether it lasts a summer or a life-time, let’s measure a successful union by how much we grow through being with a person.

So, to any nay-sayers and shamers, who clutch the statistics as proof of their disapproval and fear, I ask this; isn’t a world with hope that much more beautiful and worth living?

And perhaps the hope that love may, just may, conquer all, is surely the most courageous hope we have.