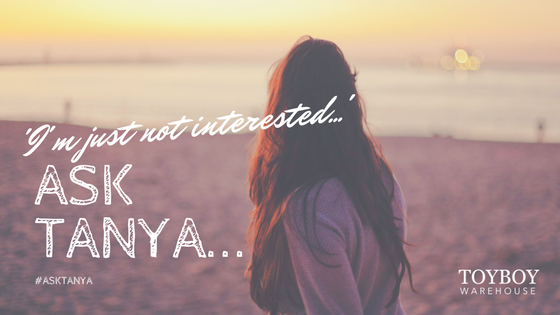 The idea of a dating site is to meet new and interesting people, which will hopefully then lead to the one you really want – but how do you let down the ones that are interested in you when you’re not interested in them?

Its never an easy thing to do, unless you’re a cold and callous person who doesn’t care about other people’s feelings, or you’re just not used to dealing with any upfront honesty for fear of being seen as nasty and untouchable. Unfortunately, its something all of us male and females will have to deal with at some point in our lives and actually, a dating site means you don’t even have to do it face to face – which in theory should make it a darn sight easier, but in effect it makes no difference!

The thing I’ve found is it all depends when the connection and disconnections are made so in effect, how long have you been conversing before you realise it isn’t what you want anymore? If it’s the first message you can always say:

I have tried various dating sites over the years and at first I would just chat using their messaging service, because you can ask a fair few questions before you decide to actually meet – though I’ve noticed today it’s seems preferable to meet sooner rather than later and make the inevitable decision in most cases, quicker.

We are all adults, we have to accept that regardless of what we may feel it may not be mutual and this all comes down to chemistry, for which we have no control whatsoever. When I first adopted the online dating scene, I was so excited, I truly believed that if I ‘favourited’ someone, they would also favourite me or if I took the first step to message them they would without doubt message me back, but in reality it doesn’t always happen as you want it to.

For centuries couples have been thrown together where one likes one but the other doesn’t and for the sake of the family go along with it, with divorce being a word never mentioned. They suffered in silence, settled for second best with someone they may have cared about as a friend, but desperate inside to be with someone they actually loved, knowing it was probably unlikely to happen. Thankfully today we have choices, though I do think maybe those choices have become so flexible, no one puts in as much effort anymore

I for one miss those halcyon days when eyes met, when you tried to maneuver yourself around your friends so you were looking in their direction, when you made your move to the ladies as soon as you saw him head that way just so you could ’accidentally’ bump into him. Now we meet online and we can dump online, but there are ways of doing it

The one thing I prefer, as I’m sure most of you do, is pure and simply be honest. Remember, not only are you wasting your time if there’s no longer any interest, but also you’re wasting theirs. Life is far too precious to spend time doing something you really don’t want to or spending time talking to someone that you’ve completely lost interest in and if you’re on a dating website, then you should be prepared for that or don’t bother signing up! It’s as simple as that.

Personally, if you’ve exchanged a fair few messages over a few days or weeks even, they deserve some respect and should be told if you no longer feel same. I don’t think there’s anything worse than just cutting everything dead by simply not responding or worse, being rude if you do!

I once chatted to a guy for a few weeks online and on the phone – we seemed to really gel, so we decided it was time to meet. Now I generally say to anyone I’m meeting, lets not raise the ‘so do you fancy me’ or ‘do you fancy meeting up again’ until after the meeting as that way no one gets embarrassed or feels humiliated and, ladies and gentlemen, don’t agree to a long evening meal if you’re not sure, as it makes it very difficult when it comes to paying the bill!

I think you kind of know the minute you meet if there’s likely to be any spark and when I met this guy I knew instantly there wasn’t but I had coffee, chatted then left after around an hour which I felt was reasonable enough time to see if I was right. I walked away, reflected back on the meeting and decided. If I don’t feel anything, there’s absolutely nothing I can do, so I politely say thank you for all the conversations but I didn’t feel any chemistry between us and if you’re both adult enough, that should be all it takes.

Unfortunately, there are some who feel they have a right over you once they’ve given you time and with those, sometimes you can’t help but be a little rude. I had same situation as above but when I told him I didn’t see things going any further and hoped he would find what he was looking for, he gave me the worst mouthful ever about leading him on, taking his time, being a player, then to top it all he told me I was out of his league anyway!

Now guys, there’s nothing more unappealing than a sore loser. I never ever make it personal, as generally it isn’t, but to come back at a woman with such venom was not very nice. The best thing to do in any situation where interest has faded is look at it as if it were you. What would you expect from them?

The best thing that I hear time and time again is ‘treat others as you’d like to be treated yourself’ and if you bear that in mind, you can’t go far wrong, but it’s a cowards way out if you just stop responding or block someone so, ladies and gentleman, its better to leave a good impression rather than a bad one so if any of you are like that, its time to grow up and face up!