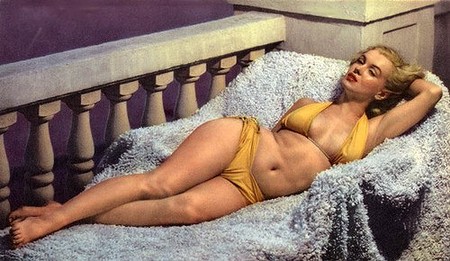 We at TBW HQ are excited to share this article from the brilliant Russ (@DickGraceless) for a guest post that had us glad we have library cards!

What Makes a Woman Sexy

On Sunday I discovered half a bottle of Glenfiddich that I didn’t know I had, which essentially makes it free Glenfiddich. It may as well have been labelled “Vino Paralytiko: this bottle will make you drunker than you’ve ever been”.

On Monday, by some miracle, I didn’t have a hangover, but I did have to work for 18 straight hours with nary a pause for a sandwich, and by the time I’d finished I was grouchy and mean-spirited.
Today is Tuesday, I have very little to do, and the lovely Katy Horwood (@katy_red) has set me a challenge: a guest blog about what makes women sexy.

The first thing I’d like to say is that you’re all sexy, but especially the ones who could be bothered reading the first couple of paragraphs, which have literally nothing to do with the rest of the blog. It’s padding, which, if you ask me, is the first thing that makes women sexy. A bit of padding.
I’m not a social butterfly, but I have known more than 7 blokes in my life (I’m boasting now) and all of them have agreed totally that women need to diet a lot less. It’s ridiculous. You’re allowing OK Magazine to bully you into an early grave.

So my first rule about being sexy is this: eat a pie, woman! I don’t want my hips to bang into yours if there’s a chance your spiky, unpadded pelvis will lacerate me. Put on a couple of pounds, and be proudly curvy. I’ve never spent the night with a girl whose ribs were visible through her vest, but I’ve seen the photos, and nothing about that body makes me want to hold it and cuddle it.

Now, maybe I’m wrong, and girls don’t really want their guy to cuddle them. Maybe you want us to give you a startling haircut, make you lean your weight on one hip and look sassy while we take photos of you in your best frock. But somehow I think that’s what fashion photographers want, not men; and probably not women either. Girls, I suspect, quite fancy a cuddle on the sofa with a glass of wine and a movie (preferably not a war movie, boys!). But all that dieting makes cuddling you feel like gripping a bag of elbows. Stop it.

Don’t wear too much make-up. Yes, your skin is a little patchy, and you may have a zit, and you may have bags under your eyes. Guess what: so have men (unless they’re that bizarre invention of 21st Century life, the “metrosexual”, in which case dump that boy and find yourself a proper bloke, with a belly and a bag of chips and a dirty, dirty laugh). Personally I don’t want to touch a layer of polyfilla, I want to kiss your skin. If we’re going out somewhere nice, of course you’ll want to get dolled-up. But what’s this business with wearing slap every minute of every day? Pack it in, and be natural. It’s much better.

Other than that, I don’t really have a strong opinion about how you look. Small boobs: nice! Big boobs: nice! Who cares, as long as you let me touch them now and again.

Looks are over-rated. Honestly, I mean it. I’m so sick of seeing adverts and television programmes infested with beautiful people. I can’t even tell if they’re beautiful any more, because there’re no “normal” people around to compare them to. If I see another advert with Cheryl sodding Cole in it, I’m going to commit a war crime. Yes, she’s bonny probably, under that avalanche of make-up, but I no longer care. I’ve seen her and Angelina and Jennifer so often now that they’re visual wallpaper. So forget about perfection, and just be you. It’s SO much more interesting.

Which brings me onto the next point: interesting women. God, I love them. Brains (phwoah). Personality (ding-dong). Humour (whoops, I’ll have to change my pants).

All of this opinion may be utterly pointless. I don’t for a moment think girls want a man like me. I’m on the wrong side of 40, barely on the right side of ugly, some distance from being rich, Northern, and make very little effort to achieve the body beautiful (I’m going for the body bountiful instead).
In fact, scratching around for things to recommend myself, I find I can only come up with the following:
•    I can fry eggs
•
•    I know quite a lot about Arctic Exploration

In short, I don’t exactly sweep girls off their feet, although I do sometimes push them over when they’re not expecting it. So you’d be ever-so-slightly mental if you follow this advice and then expect hot, young, wealthy men to chase after you. They won’t. Although you might get a line of fun, comfy, stable guys expressing a sudden interest.

But since I was asked what makes women sexy, I’m going to tell you: the thing that gets me going – I mean really makes me want to take you home and have a furtle in your underwear – is some smarts. Drop a magazine and read a few books. Stop watching Corrie and watch some documentaries. Find out what Quantitative Easing is, and why it’s going to destroy us all.

The human brain is (quite literally) the single most complicated and sophisticated thing in the entire known universe during its entire 14.5 billion year history. And what are you using yours for? Take Me Out? OK Magazine? The Daily Express? Oh, come on people, you’re so much better than that.
You’ll earn more money. You’ll be more interesting. You’ll feel more interesting. You’ll meet more interesting people. And me, or someone like me, will ask you what you’re doing on Friday night.

All of these things happen when you start reading The Guardian instead of The Sun.

Russ writes a brilliant blog ‘The Naked Mole Rat’ – check it out!

And may we recommend you follow him immediately for stimulating, interesting and often hilarious banter @DickGraceless

Ask The Experts: How to feel sexy in front of a new lover [video]

Sexy Foods For a Great Date
Get the latest from the blog: