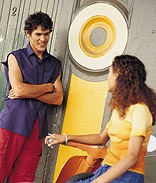 So you’ve mastered the art of eye contact and can beckon a romantic prospect with just a few coy glances… but do you really know all there is to know about the fine art of flirting? Just to make sure you’re up to speed, we culled some very surprising information that you can use to your advantage, whether you’re a cute young toyboy looking to impress a cougar, or a sophisticated woman ready to get back in there with a younger man. Read on for some juicy tidbits that may up your meet-cute quotient in no time.

1. Flirting is good for you. Studies show that people who flirt have higher white blood-cell counts, which boost both immunity and health.

2. Think batting your eyelashes is enough? Wrong! All told, scientists say there are 52 “flirting signals” used by humans. Of these, the hair-flip technique is the most common.

3. In some places, flirting is illegal. In Little Rock, AR, an antiquated law is still on the books warning that engaging in playful banter may result in a 30-day jail term. In New York City, another outdated law mandates that men may be fined $25 for gazing lasciviously at a female; a second conviction stipulates the offender wear a pair of blinders whenever he goes out for a walk.

4. Why wait for Friday? Lots of people get their flirt on during their morning commute. A full 62 percent of drivers have flirted with someone in a different vehicle while on the go, and 31 percent of those flirtations, it turns out, resulted in a date.

5. Flirting need not occur face to face. According to the Pew Research Center, 40 percent of people who look for love online say they can easily flirt with someone via email or IM.

6. In the Victorian era, fans were the ultimate playful props that could communicate all sorts of messages. A fan placed near the heart meant “You have won my love.” A half-opened fan pressed to the lips was an invitation, saying, “You may kiss me.” Hiding the eyes behind an open fan meant “I love you,” while opening and closing the fan several times was a chastisement, implying, “You are cruel.” Given how much a fan could come in handy, it’s a shame they ever invented air conditioning.

7. These days, cell phones do the flirting for you. In one survey, half of all mobile phone users have texted flirty messages to keep things interesting while separated from their amour.

8. Watch out; you can overdo it. According to the Social Issues Research Centre, the most common mistake people make when flirting is maintaining too much eye contact.

9. Sometimes, flirty gestures aren’t what they seem to be. Research has shown that men tend to routinely mistake friendly behavior for flirting.

10. Flirting is universal. A woman living in New York City and one in rural Cambodia may not have much in common, but when it comes to attracting a little attention, they both employ the very same move: smiling, arching their eyebrows, then averting their gaze and giggling. Animals flirt, too: birds, reptiles, and even fish have their own way of making romantic advances. The moral of the story: If the simple sea bass can act cute in order to further a romantic agenda, you can, too — so give it a go!

Laura Schaefer is the author of Man with Farm Seeks Woman with Tractor: The Best and Worst Personal Ads of All Time.