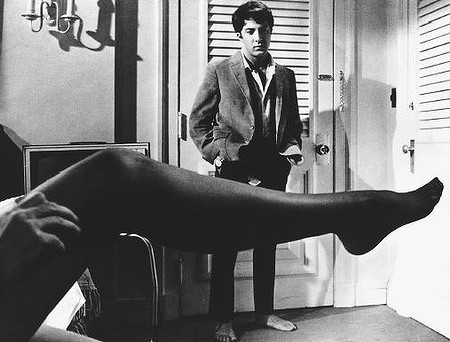 Here’s to you, Mrs. Robinson. A 2003 survey conducted by the National Association of Retired Persons revealed that one-third of single women between 40 and 60 are dating younger men, qualifying as ‘cougars’.

Brenda Dos Santos laughs, “I’m the poster child for the ‘Urban Cougar’ trend. I’m 46 and only date boys in their 20s and 30s…I love all the attention I get from them. They try harder and are not cynical or spoiled by bad past relationships.” Like many women who consciously seek out younger men, the San Francisco publicist is a refugee from an early bad marriage. The divorced mother of two finds men her age “kinda tired. They can’t keep up with me.” These days Brenda is content to “just have fun sampling all types of hot young men.”

Susan Coss explains her own predilection for young men: “They provide more creative excitement: Like me they have diverse interests in theater, music, and film, and look beyond what’s on the New York Times best seller list.” Equally appealing for the never-married 41-year-old San Francisco account executive: “Guys in this age group seem less obsessed with their careers and the roles men are supposed to play in a relationship. An older guy can be more of a child than a young one.” Translation: An ex close to her age lost this lady because he placed his needs well above hers. For the past year, Susan has been happily dating a 30-year-old. She echoes Urban Cougar Brenda, “We have fun.”

Women like Susan and Brenda no longer worry about society viewing them as “cradle robbers” for snatching up younger men in an era when online dating sites like gocougar.com and thecougarconnection.com are geared exclusively toward facilitating these intergenerational hook-ups. As syndicated sex advice columnist Dan Savage wrote in his blog on chemistry.com, “Older women/younger man couples have always existed but used to be barely tolerated and rarely acknowledged. People today are less threatened by difference and more open to discussing what makes people happy.”

If The Graduate were to be updated, the Dustin Hoffman character would be less pounced-upon and more of an equal-opportunity pouncer: A poll conducted by the online dating service mate1.com found that 65 percent of men in their 20s actively seek out women who are older by five years or more. Why the preference for a seasoned mate? As one poll respondent explained, “An older woman has seen it all, compared to a twenty-something.”

Thirty-five-year-old John Garber, who dates women 10 to 15 years his senior, elaborates: “Older women are sassy, bold, cerebral, know how to express themselves, know what they like, are good conversationalists, and are incredibly delicious lovers.” According to the New York banker, “These things are a turn on.”

Speaking of turn-ons, those women afraid of showing their cellulite to a years-younger hardbody should heed the words of Dan DeMartino, a 28-year-old Arizona entrepreneur: “Sure, younger women have better bodies, but older ones are better lovers because of experience. Oddly, they usually have more energy as well.” Dan concludes, “The brain is the most important sex organ, and as long as I connect with a partner, the sex is good to great.”

Some people find the term “cougar” offensive, while what others consider derogatory is not the word but rather the idea that older women “go after” younger men. Valerie Gibson, author of Cougar: A Guide for Older Women Dating Younger Men, has said, “I don’t see these condemnations as valid. I see them as only aimed at women — putting down older women and trying to control them.”

What do you feel about the word ‘cougar‘?

The Modern Woman and Making the First Move
Get the latest from the blog: