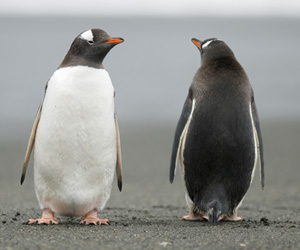 When it comes to dating and relationships, it’s a phrase we are all too familiar with: “opposites attract”. Though every cliché automatically provokes suspicion, it stands to reason that a saying this well-established must contain at least a grain of truth. Imagine, if you and your partner were both really talkative, you’d never manage a whole conversation…

A recent study found that people prefer a partner with a 22% physical resemblance to themselves. Instances of Genetic Sexual Attraction, alongside statistics like this, suggest that people feel attraction towards others based on genetic similarities. One case study revealed that when the features of a man’s face were superimposed onto a photograph of a woman, the man whose face was superimposed almost always rated that picture as the most attractive. Physical attraction seems to frequently be based around similarities instead of differences. Needless to say, this does not explain all attractions.

The Freudian view would suggest love is built around self-preservation. Our first attachment to our parents is one with the aim of survival. This narcissistic perspective would have us believe that love for our partners is then self-love shared. Though Freud’s views are often regarded as having been disproven, we know that those with an obvious self-love (narcissists) are often very attractive to certain types of people who have lower self-esteem.  The result is that a strong ego attracts a weak one.

Evolutionary theory teaches us instead that we choose partners based on features that suggest they are most healthy. This claims that we will be more attracted to people who are symmetrical, yet research has shown that perfectly symmetrical faces were less attractive than normal ones.

It is easy to imagine people of different cultures and backgrounds becoming attracted. Love and lust are not known always to be convenient. People who date through Toyboy Warehouse never share one particular factor: age. Many would think of age as very influential in defining someone’s characteristics – who feels the same at 30 as they did at 16? What this provides to a relationship is a very interesting opportunity for exchange. It is an undeniable demonstration that opposites do attract and that beyond that opposition lies a great reward to those that find something in common with someone who is on the surface very different.

The components of any strong team involves individuals that each bring something different to the mix but share the same ability to communicate and co-operate. Relationships do not always have to be built on team work, often some are at their core competitive instead, but those that aren’t often seem to last longer.

: there’s no formula for relationships. There are different parts of a person that each can be opposed to those of another: age, culture, personality, looks. Unless some of these match, it’s hard to imagine a relationship that can survive without any common ground at all.

What is your opinion on this subject? Are people attracted to their opposites, to those that resemble themselves, or both? Share your experiences in the comments below.

This blog was written by Admin Debbie and published as part of our 30 Blogs in 30 Days campaign.

Karl’s dating rules for the guys

The ‘Value’ of Older Women

An Interview with Tricia Wolanin – Dating Experts Month
Get the latest from the blog: