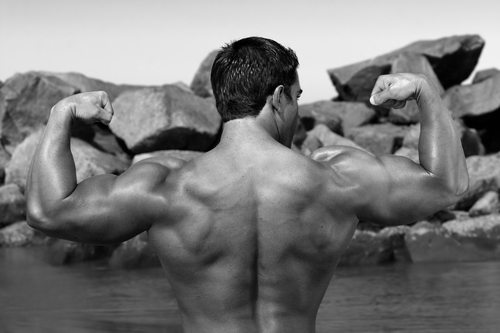 “How far can a ripped torso take a film?” asked one article on the new Tarzan film.  Then there was this little gem from Buzzfeed  about Italian water polo players. And that hilarious Descendants of the Sun promo.

Believe it or not, I was quite unmoved by all these displays of male physical perfection. I appreciated them, but.

Attractiveness is a funny thing. To me, beautiful doesn’t equate to sexiness but sexiness often does equate to beautiful. It’s a fine line and frequently blurs. So bear with me.

I am decidedly underwhelmed by the ripped gym-honed body that has been shaved or waxed¹ to within an inch of its life. I am well aware that many of my contemporaries love a smooth chest and a shaved packet², but me, I prefer everything intact. A trim is acceptable when it gets so long your fingers get tangled in it, otherwise I’d rather you leave your short and curlies alone please. And don’t get me started on body hair. Chest hair is sexy to me, as is belly fur, and that “snail trail” is delightful. I know, I know — I can hear some of you gagging already. But I like almost hairless bodies too – so long as they are so by nature.

Sexy to me is a natural body. Sexiest to me is one that gets a workout, gets its tone and strength from doing something it loves, be it running, climbing, swimming, dancing, cycling or walking. I don’t really care, so long as it’s activity that’s enjoyed for itself – not just to look good. It says to me that it’s a body that’s loved for itself, not for the way it looks. It tells me that this is a body that would thrill to warm fingers walking up its thigh, the light brush of lips across the shoulder blade. You see, I’m a sensual creature and being able to fully enjoy what your body can do, being able to enjoy what it feels, provides a delicious feedback loop that’s kind of hard to beat.

Colour also plays a huge part in what turns me on. One beauty had skin like dark honey, over which, a constellation of moles and freckles. He had a runner’s body, lean, with strength in his legs, and fairly hirsute. He was a delight to look at and caress³. In contrast, there was a blonde with barely any hair, who was long, with steel in his abs and arms, a lightweight boxer in training. Everything about him was light gold, and glimmered ever so slightly, it was quite something.

I used to think sexiness came from confidence in one’s own skin. But a couple of recent encounters showed me that there is a certain something about shyness too. One was just hesitant, unsure about where to put limbs (but not where to put his lips, happily) and trembled ever so slightly. It was simply enchanting.

Another flushed easily, and fumbled over his words whenever I surprised him. He was like an awkward young giraffe, all long-limbed gawkiness. It charmed the pants off me. Literally. It helped that he was pale as moonlight, blonde like a small sun, and had the most enormous, intensely blue eyes I had ever seen. And when he spoke, he had a mellifluous voice…

Which brings me to something that you just can’t get off a profile picture: the sound of someone’s voice. Cadence, tone and accent. I had spent much of my adult life assessing voices for work, so it’s something that affects me profoundly. It doesn’t matter how beautiful you are physically, but if the sound of your voice grates on me, I have to say, no thanks. A voice that is a pleasure to listen to, that raises the small hairs on my shoulders and has me smiling like a sun-struck loon is automatically sexy.

You know what knocks me over every time? The smile. Shy or confident, lopsided or five-miles wide, a suggestion in a midnight beard or a broad dimpled grin. I couldn’t tell you exactly why a particular smile makes someone sexy and why another doesn’t. It does not have anything to do with how genuine that smile is either.

Physicality aside, all that is nothing if the conversation is stilted and has my mind wandering. The reverse is also true, although less so. I have been exceedingly lucky in that, so far, most of my first meets have sparked and crackled, perfect meetings of mind and body. I have to say though, the real deal breaker for me is the voice.  That is not something  I seem to be able to get over, try as I might. It’s like hearing nails on a board at worst.

All this is my tastes, my preferences — this is something I want to emphasise.

The media, and therefore, society, seems to advocate a certain standard of beauty and sexiness. I say poo to that.  Discern for yourself what appeals to you. Don’t let anyone else dictate what you should or should not like. Love yourself and your body. Find out what turns you on, not what “experts” say should turn you on. Oh, and roll with it when that changes, because tastes do. I may like natural bodies now, but I’ve had a carefully manicured body under my hands and he was just as beautiful to me.

I, like you, am unique. I won’t appeal to all, and really, why would I want to?

¹ What are you? A dolphin? So sayeth that icon of malehood, Mr T.

² I know many men like a “clean workspace” but it desensitises me and leaves me numb. Plus: ew! It’s just a bit child-like, don’t you think?

³ To be perfectly honest, they are all a pleasure to caress. 🙂

6 of World’s Most Beautiful Older Women