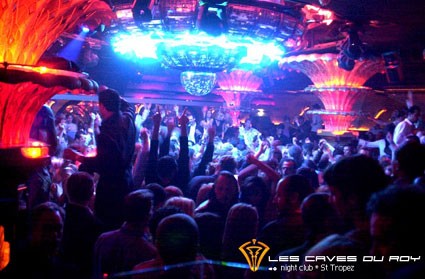 It’s finally time to go home after two fabulous weeks in Saint-Tropez. Well it wasn’t quite Saint-Tropez, I was staying in a villa in the hills above Saint-T near a little village called Ramatuelle. You know the type of thing: pines, cypresses and lavender, late lunches on the terrace, all afternoon by the pool and dinner out on the town.

Saint-T is a strange place. It’s trashy-flashy, bling-bling baby! In fact I’ve learnt a new word in French: ‘cagole’ which means trashy. One of the French friends I was staying with said Saint-T is ‘cagole central’. The style of dress is definitely Cavalli rather than Armani. People, and lets not confuse that with ‘les people’ – the French term for celebs – parade their flashy fashion early evening along the port between the cafés: Sennequier, Bar du Port and Café de Paris and the big, shiny white yachts tightly packed and glistening with pride like a new set of teeth on the mouth of the port. You can find bigger yachts elsewhere on the Côte d’Azur, for example in Antibes, which has a deeper port, but the Saint-Tropez they are totally in your face, like everything else in this party town.

For those that want the full on experience here you spend your days on the celeb beaches like Club 55 or La voile Rouge and if you want the party to start in the afternoon you head off to Nikki Beach, where they have DJs and cocktails all afternoon. The coolest new place is the Kube Hotel in Gassin on the edge of Saint-T, which is the ex-hospital, very Phillipe Starck style and ‘ze place to be’ *French accent here pleez*. However the locals don’t go because the famous Ice bar at the hotel is where the morgue used to be.

There a two nightclubs in Saint-T: Les Caves du Roy which despite being around for years has never lost its top slot ranking, and The V.I.P. Room which is newer and for a slightly younger crowd. Paris Hilton was to be seen there a few weeks ago with her entourage and paparazzi following on behind.

So after dinner with friends in town you hit the port-side bars around 10.30. The best one by far is the Bar du Port owned by Gregoire the inventor of the fashionable alcopop, the ‘Ice Tropez’, a peachy drink now selling in smart bottles all over the place. Gregoire does fab cocktails and has great DJ’s to get you in the party mood before going clubbing and there was no shortage of handsome toyboys for eye candy.

The night we went to The Caves du Roy we were with a friend who knew the owner so were wafted past a long line of hopeful ‘wanna-get-ins’. We arrived at 12.30 and within half an hour the place was packed. All the tables round the dance floor had ice-buckets full of magnums of vodka and champagne waiting to be consumed. The usual French no smoking laws are relaxed and there’s a feeling that anyone can do anything. Vive la decadence!

Three times during the evening the DJ would interrupt the music as waiters took a methuselah (equal to 6 bottles) of Louis Roederer Cristal to some big fromage, holding it above their heads with sparklers on the bottle while the DJ would announce the nationality of the customer shouting “Russia in ze house! Italy in ze house” or “America in ze house” and everyone would cheer. Part of the deal of paying an eye-watering €36,000 was that everyone in the house would know that you had. Only for the wealthy big fromages!

This is where the super-rich come to party: some are the international jet-set, others are wealthy financiers entertaining clients just off their yachts, and quite a few of the women are working the rich financiers. I was told that the normal sales girls in the boutiques of Saint-T are booted out during ‘the season’ to make way for girls that work both day and night.

The music was great and there was virtually nobody sitting, everyone was dancing on the tables, on the seats on the dance floor. There was an energy that got everyone going. We lasted until 4 am then made our way back to base camp as best we could.

I was sad to leave Saint-Tropez but maybe I’ll go back again for another dose of sun, sea and bling!

Brighton Beach Memoirs
Get the latest from the blog: