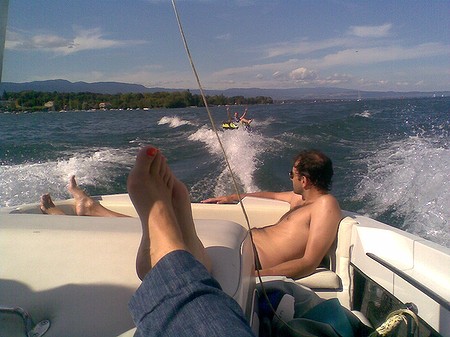 I’ve just returned from a weekend in Geneva. It’s a city I hadn’t visited before as I always thought there were more exciting places to go but as I have friends there I felt it was time for a visit.

It isn’t a town that’s at the top of My most happening place list but it certainly has its charms. It’s relatively small without being provincial as it has a large international community and more than anything, it is wonderful in the summer. On the down side, I think it’s probably the most expensive town I’ve ever been to, especially as the Swiss Franc is about the only Western currency that is holding its value. I go by the Margherita scale (how much a pizza Margherita costs) and there you probably couldn’t get one for less than 24 Swiss Francs which is about £19.

This weekend was the Fete de Geneva where the lake front becomes like a cross between the carnival in Rio and Blackpool with fun fair rides attracting you with their flashing lights and at the same repelling you with the stomach turning mechanics of their attractions. This year the theme was India: the jewel in the crown was a replica of the Taj Mahal over looking the lake in the Jardin Anglais. On Saturday night there was a spectacular fireworks display which lasted for almost an hour and lit up the sky as if some magical Indian prince had arrived by boat throwing his pouch of jewels into the dark sky.

The high point of the trip was a boat ride on the lake which was absolutely stunning. It seems that the favourite sport on the lake is to ride the bouée. A bouée is an inflatable ring which is dragged behind a fast moving boat and the idea is to stay in as long as possible. I guess it’s the Swiss version of the bucking bronco as the bouée is really buffeted around by the waves especially as the boat turns on a curve. For me it was more of a spectator sport, as it didn’t look too much fun to be in the bouée, but the boys loved it and no matter how rough it got, they wanted to carry on.

Well, I’ll definitely be going back and there was some talk of starting TBW Geneva, but then there is Dublin, Brisbane and NYC first…

P.S. Please excuse my feet in the middle of the photo!

Politics: When Girls Won’t Be Boys

In Praise of Good Boys

HALLO BOYS!
Get the latest from the blog: