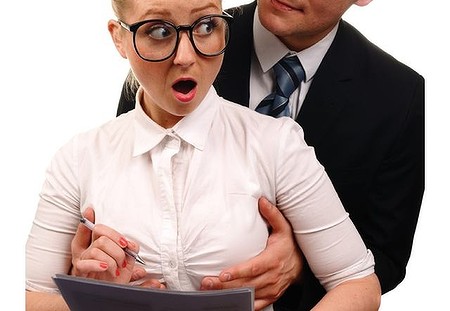 Why do men grope?

It used to be called wandering hand trouble, and was brushed off, but now deliberately touching a colleague’s bottom is a more serious matter. In a British or American workplace it’s likely to trigger an investigation and could lead to dismissal.

Glenn D Wilson, professor of psychology at Gresham college says men interpret friendliness as a sexual overture from women where in fact it was only sexual in their own minds. Men misinterpret women’s actions and fail to read the negative feedback. Women, he says, use flirtation to get other things apart from sex which confuses matters for men.

Women take offence at inappropriate touching with varying degree of indignation depending on the man’s occupational status, attractiveness marital status. Touching is used to test the water but sometimes they take that too fast and too far.

So here’s the science…

This is behaviour we share with other primates. Men produce androstenone to drive other men off their territory and repels women unless they are ovulating. Androstenone was the first mammalian pheromone to be identified. It is found in high concentrations in the saliva of male pigs, and, when sniffed by a female pig that is in heat, results in the female assuming the mating stance.

Women produce copulins which have the effect of blinding men as to whether they are attractive or not. Copulins are an exclusively female group of pheromones. They are secreted into the vagina at the optimum ratios during ovulation with the aim of encouraging men to desire to copulate. This group of pheromones primarily consists of fatty acids that would serve little to no function on there own, but in combination they have been shown to increase testosterone levels in men by 150%. This increase in testosterone may cause feelings of arousal in men if a woman is present. It is said that once a man smells Copulins on a woman she is deemed to be more attractive.