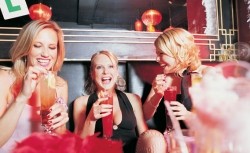 Ask a straight man, “How do you like your women?” and it’s unlikely he’ll answer, “Dumb and sleepy.” But according to new findings, these characteristics – and any other traits suggesting that the lady isn’t particularly alert – are precisely what the human male has evolved to look for in a one-night-stand.

In an article soon to be published in Evolution and Human Behavior, University of Texas, Austin graduate student Cari Goetz and her colleagues explored what they called the sexual exploitability hypothesis.

The hypothesis is based on the differences between male and female reproductive strategies as humans evolved. For ancestral women, casual intercourse with an emotionally unattached man who had no clear intention of sticking around to raise any resulting offspring constituted a massive genetic gamble. By contrast, for a man with somewhere around 85 million sperm cells churned out every day – per testicle – the frivolous expenditure of gametes was far less detrimental to his genetic interests.

Goetz and her team began with the assumption that – because our brains evolved long before prophylactics entered the picture – female cognition is still sensitive to the pregnancy-related consequences of uncommitted sex and women remain more reluctant than men to engage in it. They set out to test the idea that any indication that a woman’s guard is lowered – that she’s “sexually exploitable” – is a turn-on for your average man. “[T]he assessment of a woman’s immediate vulnerability,” surmise the authors, “may be central to the activation of psychological mechanisms related to sexual exploitation.”

You can read the rest of the article here

All The Single Ladies

Why do men grope?

Toyboy Warehouse Goes To Ladies Day at Lords
Get the latest from the blog: