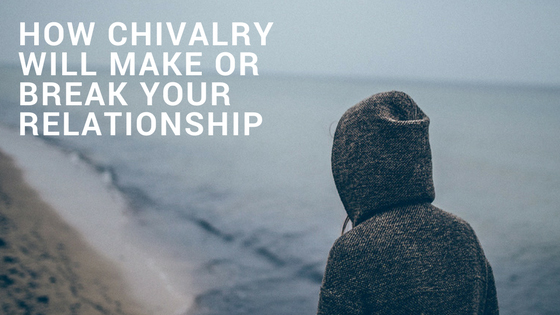 How Chivalry Will Make or Break Your Relationship

So, you got the girl. Success. Been in a relationship for months. Success. Cohabiting or even getting married. Success. You laid out the foundations of your future, thinking not just about you and your partner, but children too. It all seemed to come together, an idyllic union so cliché that you marvelled at how ridiculously elegant it all was.

But now you find yourself nostalgic about an earlier pre-relationship life, asking, ‘Remember when I was single…?’ Maybe your relationship is not as healthy as you think. I recently got thinking about the notion that some couples are not honest with each other – not in terms of fidelity, but in being themselves, transparent and forthright. A friend had recently opened up to me about his girlfriend of three months. It was a rare glimpse: he always kept friends at an arm’s-length when it concerned his personal life. So when he told me his relationship had, to put in his words, ‘come to a standstill,’ I knew it was a bona fide concern. ‘Things aren’t looking too good for us. I feel like crap, but honestly I wish that she’d just tell me to go.’ I asked him why, and to my surprise, he shrugged, stating she despised chivalry, and that their relationship was nothing more than a game of maintaining façades. It took me a moment to process what he had said, as we stood in a library perusing books to pass the time. I failed to reconcile the reasoning and my friend’s personality; he is the sort of guy who would open doors for women, lend an ear to female friends who were going through a rough patch, and chin-wagging to lighten the mood. It was difficult to imagine that the respect of a mild-mannered, six-foot something bloke that had once served as a building block for his relationship proved to be detrimental.

A few weeks later they parted ways, and like everything they left unsaid to one another, their relationship was swept under the carpet. Was this simply a case of better soon then later? Maybe. Yet, this perception of chivalry needs to be more broadly addressed. Here, relationship etiquette becomes even muddier. When is chivalry adequate? When is it stifling the imbalance that many couples value as part of nurturing a healthy relationship?

I believe that chivalry is a two-sided coin. Where one may consider gallantry a romantic aspect, another may find it patronising. Given the topicality of gender equality, shouldn’t chivalry be reciprocated, woman-to-man? According to the Daily Mail, research indicated that seven per cent of women find chivalry patronising while only one in seven men will offer their seat to a woman for fear of causing offence.[1] So, there you have it. Chivalry is akin to a leap of faith – just give it a try. You may just meet your soul mate! Okay, that is a stretch, but regardless, it surely is not a terrible thing in the world; rather, it is something that is sorely lacking – don’t let fear of rejection overshadow benevolence. For couples, if you find it disrupting the harmony, ease off, and most of all, communicate and understand each other. A surprise breakfast in bed would do no harm. On the other hand, if you’re being kind out of a need to bottle up emotions and avoid honesty with you partner (as my friend was told he doing), think about the long-term prospects of your relationship. It’s better to be close and honest than living in faux happiness.

5 Stages of a Break Up

Ask Lucy – Too Much Relationship Work, Being Authentic & Dating Someone Who’s Been Single For a Long Time