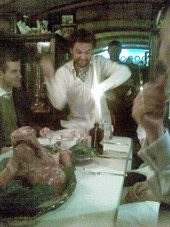 I’ve always been a vodka aficionado, but this week, at London Cocktail Week I’ve come to understand the delights of that very English beverage – gin. I say very English but it was invented by the Dutch physician Franciscus Sylvius in the early 17th century. It was a neutral spirit distilled with juniper berries, sold in pharmacies and used to treat such medical problems as kidney ailments, lumbago, stomach ailments, gallstones, and gout. There are some people in my circle in particular who swear it has such medicinal properties…

Gin became popular in England after the government allowed unlicensed gin production and at the same time imposed a heavy duty on all imported spirits. This created a market for poor-quality grain that was unfit for brewing beer, and thousands of gin-shops sprang up throughout England, a period known as the Gin Craze. By 1740 the production of gin had increased to six times that of beer, and because of its cheapness it became popular with the poor. Of the 15,000 drinking establishments in London, over half were gin-shops. Beer maintained a healthy reputation as it was often safer to drink the brewed ale than unclean plain water.

In tropical British colonies, gin was used to mask the bitter flavour of quinine, which was the only effective anti-malarial compound. The quinine was dissolved in carbonated water to form tonic water, the resulting mix becoming the origin of today’s popular gin and tonic combination, although modern tonic water contains only a trace of quinine as flavouring.

Gin is a popular base spirit for many classic mixed drinks, including the martini. Secretly produced “bathtub gin” was commonly available in the speakeasies and “blind pigs” of Prohibition-era America due to the relative simplicity of the production method. Gin remained popular as the basis of many cocktails after the repeal of Prohibition.

Greenall’s have the biggest distilleries in the UK and are responsible for 1/16 bottles of gin produced anywhere in the world (apparently one in eight if you cut out the Philippines!) They distil their own brands and other labels too like the renowned Bombay Sapphire. They are bringing out two new gins: Bloom and Berkeley Square. The trend these days is for botanicals (which means any floral or herb note you want to throw in the mix) and the poor old juniper berry seems to be getting swamped by other flavours.

I thought Bloom actually tasted more like scent than gin, although I liked the herby taste of Berkeley Square, a more masculine tasting flavour. Something I didn’t know is that outside the UK, Spain is the biggest importer of gin and they tend to drink it in cognac shaped glasses.

The following day I went to a tasting of Chase gin which is made from apples and has a strange rubbery taste to it. No trace of juniper there!

However the week ended on a high note as I went to a dinner organised by Hendrick’s gin in an old Victorian railway carriage parked for the purposes of cocktail week on the Clerkenwell road. They called the event The Hendrick’s Sublimely Absurd Coercion of Infrequently Used Taste Buds and Disbelieving Retinas, and it truly was just that.

In a disused petrol station, you arrived to find the carriage parked on the left hand side with a croquet green in front and a group of expectant diners wearing black tie, mallet in hand, knocking a ball around while sipping a G&T. The lucky nine of us who managed to get tickets were treated to a feast of gastronomic delights created by that inimical duo Bompas & Parr more commonly known as the Jellymongers. Gin cocktails were served all night by a certain Mr Winch, expert mixologist and the evening was organised by Louis, the current brand ambassador, seen in the photo explaining how for an earlier event they put Hendrick’s into an air-cooling unit to create a fine intipsycating mist.

Now there’s an idea for the TBW Christmas party…

Dennis and his Big Digger

Boys, buoys and bouées
Get the latest from the blog: