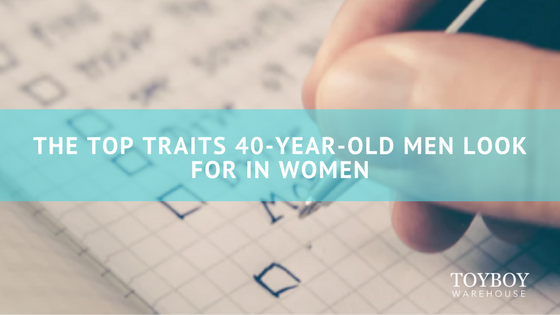 The Top Traits 40-Year-Old Men Look for in Women

Many people consider their 40s to be their favourite decade of life.

After all, by the time the big four-oh rolls around, you have a lot of things figured out.

Gone are the days when you insisted on being up with the trends. Cerebral pursuits are now your game.

You’re probably more mature, much wiser, and perhaps even smarter than ever before.

Instead of competing with your friends, you now probably have your life on the track that you had wanted it to be on since you were in your 20s and 30s.

But if you still haven’t gotten hitched, you might be feeling like something is lacking in your life.

Believe it or not, however, the expectations that men have in their 40s don’t differ so greatly from those they had in their younger years.

That’s according to an analysis of the online dating profiles of over half a million men on the Zoosk dating website.

What else was found?

Let’s have a look…

No matter what age category men fall into, they are all, first and foremost, looking for a fun woman.

That’s because no matter how old we get, fun is what adds spice to our lives. Without fun, life is basically meaningless.

Interestingly, honesty came in second across the board.

This is a fascinating trend and seems to demonstrate that men are acutely aware of the dangers of having “too much fun.”

Unlike younger men, guys in their 40s put a woman who is nurturing above all.

This is likely because by this age, most men realise what is truly important in life.

That means that, although looks always play some role, men are more open to the idea of beauty being skin deep.

There is also the sad fact that many men in their 40s no longer have a mother to provide them with care, love, and kindness.

That is not to say that a woman should be a replacement for one’s mother, but there is definitely a correlation between the two.

Intelligence is the 16th most commonly cited characteristic.

Most age groups list this as an important feature in a woman, but they way they refer to it differs by group.

Men under 40 tended to use the word ‘smart’, while those 40 and over, used the word ‘intelligence.’

What does this mean?

Well, considering all of the wisdom and maturity men in their 40s possess, it probably has something to do with knowing the difference between a woman with knowledge and a woman who knows how to apply knowledge.

By the time 40 rolls around, it’s likely that you’ve had your fair share of romances.

Loyalty is another feature men in their 40s expect from women.

At this point in a man’s life, the last thing he wants to do is play games and be betrayed by someone with whom he is trying to build a future.

Speaking of priorities, men in their 40s are seeking out women who are positive about their lives, the lives of their loved ones, and the future.

Men tend to understand the importance of surrounding oneself with positive energy and by the time their 40s role around, they make it a priority.

Your expectations may differ from those of the average 40-year-old man, but I think it’s safe to say that most people are simply looking for someone kind, caring, and sweet to spend the rest of their life with.

If you are setting out on a journey to meet someone in your 40s, you may encounter difficulties and even get frustrated.

Just take comfort in the fact that you are not alone and that there are countless men and women just like you on that same path.

Pauline Plott is a London-based blogger who became a dating guru after learning the psychology behind modern romance and signing up for every dating website in pursuit of relationship bliss. She shares her reviews and opinions on DatingSpot.co.uk.

The ‘Emma’ Dilemma – Dating a Carer

Can a 21 Year Age Gap Work?
Get the latest from the blog: