The Joy of Dating a Toyboy 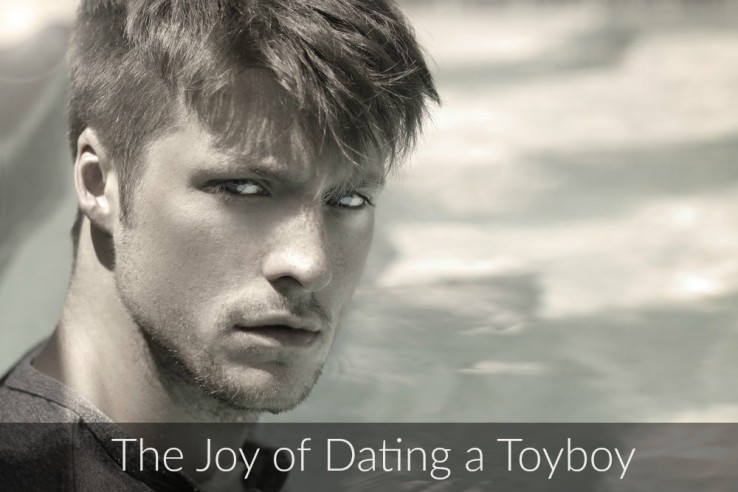 I got asked the eternal question again last week! What do you get out of dating toyboys?

The question often posed by a seemingly happily married female, with that my life-is-better-than-yours smugness that seems to go with the territory always infuriates me! It is often followed by the other platitude… “Don’t you want to meet someone?”  The someone in question is (as we older woman who date younger men know) the same age or older gentleman who is looking for a long-term, committed relationship, preferably live in (because they get lonely) and requires me to be a caring, nurturing housewife. Been there, done that!

As I sigh and launch into my lengthy explanation that having been married twice I’m not looking for a husband and that younger men bring far more to the table than just meat and two veg! Not that I’m complaining about either the meat or the veg. I just prefer to buy mine in the fresh produce aisles at Marks & Spencer not the nearly past their sell by date ones in Tesco’s!

This is where I see one of two reactions:

I see her eyebrows go up and to make herself feel better she will reassure herself internally that I am heading for a fall and it will all go horribly wrong for me some time in the future.

The other often repeated reaction I get is one of amazement and adulation. The lady in question often single and maybe the wrong side of forty views me with amazement and envy and says wistfully

“I wish I could get myself a toyboy”.

It is obvious that she would love to be in my situation but doesn’t have the confidence to try and is full of apprehension. This one also infuriates me but for completely different reasons. I can empathise entirely with this woman… I was this woman.

When my second marriage went south along with my husband (and the woman that lived next door) to say I was devastated would be an understatement.  To be abandoned after a lengthy marriage when you have been faithful  and gone over and above the call of duty was to say the least a body blow.  But to have it happen when you are sailing at forty knots into your fifties was capsizing. It was all I could do to stay afloat and not drown in my own misery.  So what was I to do ?

Finding a determination I didn’t know I had,  I reinvented myself. All the usual stuff… weight loss, exercise, hair and makeup. I changed my wardrobe… though not entirely,  money was in short supply but enough to put a spring in my step in the bright shiny very new  stilettos that I purchased.

I gathered the sisterhood around me for support starting by throwing a divorce party! An all girl affair of course. I launched myself into socialising.

If someone asked me to do something I said “yes!“

Even if I didn’t usually enjoy it. I went out at every opportunity with old friends, new friends, my daughters in fact anyone that asked me. This was not the time to be sitting in by yourself disappearing down the neck of a large bottle of Chardonnay!

During one of my early nights out I was chatting to a nice young guy that I knew a little. When he found out I was newly single, he propositioned me. I laughed loudly thinking he was joking. He made it clear he wasn’t over the next  few weeks. I was amused, I mean he couldn’t be serious could he?  He was twenty one! The age-gap was stretched out before us like the Grand Canyon but still he persisted.  I was flattered,  his attentions were in no small way helping me to get my mojo back.  He was good looking and charming and the fact that he desired me was a huge turn on. My sex life had been none existent for sometime and I loved sex I missed it..a lot. The combination of all these things rose to the surface all at once and sent me hurtling myself, like a lemming over the cliff and into his open arms and be blowed with the consequences.

How was it for you?

That first experience was the deal breaker.  I was nervous and worried about getting naked. Could I remember the moves? It had been so long. Would I be able to keep up with a lithe and supple twenty one year old?  What about my wobbly bits? At the point where the self doubt was going to overwhelm me he knocked on the door.  I reached for the Chardonnay . My fears and doubts were unfounded. It was like going to bed with an adorable puppy that couldn’t do enough to please me. His positive joy in my body was a revelation. The woman in me was reignited and left burning brightly. I was back.

As my first experience was so empowering I decided that maybe younger men would suit me very well going forward. But where to locate them ? As luck would have it an article appeared in the Mail on Sunday about a new website for gorgoeus women looking to date the younger man... Toyboywarehouse.com was in its infancy and soundaed like my kind of place. It wasn’t easy for me as internet dating was fairly new and  I didn’t have a clue what I was doing . Date one was a disaster but date two was va va voom ! Over the next year I used TBW extensively and as my confidence grew so did my dates. It was also nice to be involved with a community where all of the above explanations where are not required.

So my advice to all those woman that used to be me… is to go for it.  You won’t know until you try and life is too short to sit back waiting for something good to happen. It may not suit everyone but as woman you deserve to have joy in your life and there is a lot of  joy to be found in the arms of the younger man if only you are willing to flout convention.

To the doubter’s I say this….

For the full story get my book Sex and the Signposts available on Amazon! Follow my blog Sexandthesignposts.com

5 Quick Tips For Dating After Divorce