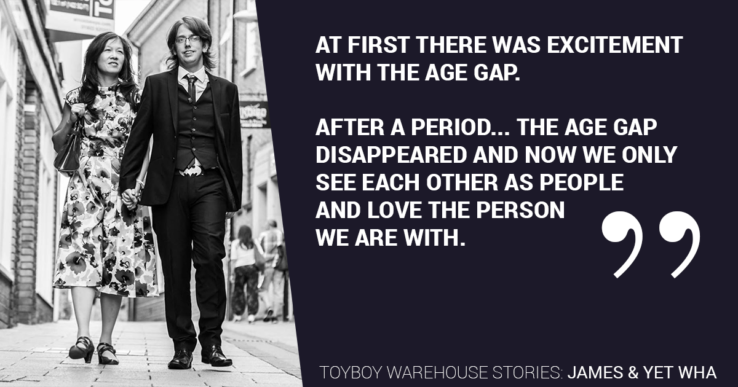 Of the many love stories to begin on Toyboy Warehouse, one of the most charming of all is that of James, 28, and Yet Wha, 48. It all started with the most simple of flirtations – a wink – and has since led to their becoming a beautiful family with exciting future plans.

James had dated before but it took him a while to find the right woman for him: ‘I was actually one week away from being married before things went wrong.’

More bad relationships followed, but something good came of his experience – a son. After splitting from the child’s mother, he started dating again with poor success until he met Yet Wha. She too had experienced trials and setbacks in her search for love: ‘Before I met James I had been single for several years. My last relationship had affected me quite badly and it took a long time for me to get over it.’

…but each knew something already about their match

For James, an interest in older women began early, with a childhood crush on archetypal cougar Demi Moore. Later he found as well as beauty, the older woman offered him real conversation and connection. This was more than just preamble to the ‘where is the bedroom?’ chatter he got with women of his own age.

Yet Wha too was sure that the right partner for her was younger. ‘My last couple of boyfriends were younger than me and I never felt there was a difference between us. In my head I am still in my twenties.’

‘So being in the company of younger men never made me feel uncomfortable. I also like the buzzing feeling when I realise a younger man finds me attractive.’

When James noticed Yet Wha, he knew he needed to take an intelligent approach…

‘Reading through her profile carefully I judged that she is the sort of person who would like a slow approach,’ explains James. So before sending her a message, he winked and chose a card to get her attention.

The two messaged back and forth for some time before exchanging numbers, then James made the journey to Norwich to meet Yet Wha for the first time.

The first date was perfect:

‘I drove up to Norfolk from Essex the first time we met face to face.

‘We spent two wonderful days together going out to the coast and around Norwich. Which ended nicely as we sat cuddling enjoying our mutual love of the F1 racing on TV.’

Shortly after, their romance encountered a few challenges…

Just a few weeks after meeting James, Yet Wha’s mother became very ill so she had to be at her mothers side. Despite the distance, they kept regular contact through text and phone calls late at night. Getting to know each other emotionally before physically is one of the things they credit with the strength of their relationship.

James had his share of personal difficulties too. ‘I have a complication with my health so I was struggling to work,’ he recalls. ‘Eventually I got to a state where I could work again due to the love and support that Yet Wha gave me. I decided that the best place to get work would be in Norwich. Yet Wha let me stay with her while I started work.’

‘The first few months were a struggle for both of us, having not lived with partners for a long while. Initially it was supposed to be until I got a place of my own. It ended up getting to a point where we both did not want to live apart.’

…but age was never an issue

‘There are little differences that have affected the relationship dynamics,’ explains Yet Wha. ‘We each have habits that are more relevant to our respective ages that we tolerate and make fun of.’

‘There aren’t many challenges for us, only some differences or habits that are difficult to get over. For me I have been independent for so long and so self-reliant that my expectations of James is to be like me.’

James: ‘At first there was excitement with the gap. After a period, the thought of the age gap disappeared and now we only see each other as people and love the person we are with. Once true love sets in you and your partner no longer see the differences’.

Ever since the couple have been planning their adventures, starting with Yet Wha taking James to Hong Kong to see the country her family comes from. And then? Moving into a house so we can live a normal life and see more of the world together. The couple explained, ‘we have both travelled a lot in the past but to travel and experience things together will mean a lot more.’

Read Yet Wha’s amazing account of her time at Toyboy Warehouse:

‘The experience of Toyboy Warehouse is a bit like a rollercoaster. The first step is the first climb full of anticipation, next the excitement occurs as the flattery fills you with butterflies. There are downs as you realise quite a lot of the men are only interested something completely different, then there is a second or third flush of excitement as it introduces you to new men. For a while there is a plateau as the same scenarios play out again. Then there is a flurry and for me someone different came along and showed me he was worth getting to know.

Getting off the rollercoaster showed that I enjoyed the ride.’

Find out more about the couple and see their romance unfold on Channel 5’s Age Gap Love.

Start your own adventure Check out Toyboy Warehouse

How I Started My Dating Life At Age 62